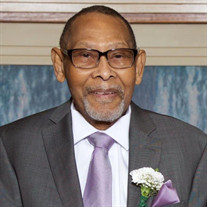 The celebrant hails from Jamaica "the island of springs - the Fair Queen of the blue Caribbean Sea". February 10,1932 was a joyous day in the household of Laurel and Altamont James Johnson when a bouncing baby boy was born. They named him Keith Anthony Johnson. Keith was the older of two children. He and his sister Fay had a very close relationship and was affectionately known to her as " G," but to his nieces, nephews, he was "Uncle G." Having lost his father at an early age brought him very close to his mother who was "the apple of his eye". Keith was never shy to express the love he had for his mother sometimes with tearful eyes. He received his education in Jamaica where he obtained a certificate in Bookkeeping and a higher certificate in Accounting both from the London Chamber of Commerce. After the death of his mother, he immigrated to London, England to join his sister Fay. While in England in his pursuit for learning he attended trade school and was certified in the railroad industry. This qualified him for acceptance at the Port Authority Trans-Hudson Division, Hoboken, New Jersey as a Railroad Car Repairman. His career at the Port Authority spanned 30 years. During his tenure he was the Safety Officer and received many awards including membership in the Port Service Club. In 1972 Keith was introduced to Marjorie Manning at a wedding reception where she officiated as a bridesmaid. Cupid's arrow struck and Keith decided that he was going to make Marjorie his bride instead of a bridesmaid. He accepted Christ and became a member of the Linden Seventh-day Adventist Church. On July 7, 1974 they exchanged marriage vows. Quite often, Keith would spontaneously express his love for Marjorie by placing his hands on her shoulders, gazing into her eyes, asking the question "you know what?" To that she replied "No. What?" His passionate response was always "I love you!" Their joy was enhanced with the birth of their son, Anthony Omar and three years later, they were blessed with a baby girl, Alisha Gail. Keith referred to Omar as his one and only son and to Alisha as his one and only love, and his peach! He held an exceptionally rare bond with his children. Keith immigrated to the United States in 1968. He took pride in his Jamaican and British roots and was reluctant to become a U.S. citizen, but did so on February 8, 2019. Throughout his years, he enjoyed sports, which included: tennis, cricket and soccer, especially women's soccer. His love of soccer inspired him to encourage Omar, to participate in the summer soccer program, sponsored by the Police Atlhletic League (PAL). Many perceived him as a quiet person. However, he was observant of personalities and a deep thinker. He was an avid reader, well versed in African American Literature, and music, particularly Jazz. He acquired a large collection of books related to Black History and Jazz artists. Ella Fitzgerald, Dizzy Gillespie, and Miles Davis were among his favorites. During his retirement years, he spent many hours reading, nodding to the beat of jazz and spending time gardening. Roses were his favorite flower, and he grew a wide variety of them. Keith also spent time cooking meals and would not eat until Marjorie came home from work. His favorite pastime was walking Alisha's dog "Moochie" where they stopped in the neighbors' driveway to exchange common interests in gardening skills such as growing tomatoes, peppers etc. Keith offered Marjorie the world, but she unselfishly accepted only what was needed. She was the love of his life, so that even after their brief separation, he found no other to compare, which resulted Keith relocating to Atlanta, Georgia. The two reunited on October 22, 2006, at Shiloh Seventh-Day Adventist Church in Smyrna, GA, and reclaimed their vows for better or worse, richer or poorer, in sickness and in health. In his golden years, the challenges of dementia and his past work environment, which exposed him to various chemicals, took its toll and robbed him of many earthly joys. But, alas! he had a Savior to whom he grew intimately closer. He spent many hours watching religious musical programs on 3 ABN (3 Angels Broadcasting Network), that featured singing and instrumental talents of youth. On June 3, Keith was admitted to Cobb Wellstar Hospital. After a brief illness, he departed this life on June 9, 2021. Present with him to the very end, was his loving wife Marjorie, daughter Alisha, and son Omar. Also present were his nieces and nephews. Keith is survived by his wife Marjorie, son Omar (Evelyn), daughter Alisha, sister Fay, niece Jo (Marcus), grandniece Alix (Edward), great grand niece Lilly, great grand nephews Freddie and twins Charlie and Archie, and a host of relatives, close friends, church family and neighbors.

The celebrant hails from Jamaica "the island of springs - the Fair Queen of the blue Caribbean Sea". February 10,1932 was a joyous day in the household of Laurel and Altamont James Johnson when a bouncing baby boy was born. They named him Keith... View Obituary & Service Information

The family of Keith Anthony Johnson created this Life Tributes page to make it easy to share your memories.

The celebrant hails from Jamaica &quot;the island of springs - the...

Send flowers to the Johnson family.