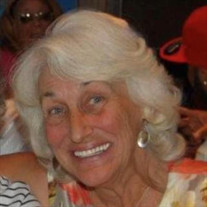 Kathleen Clonts Cherry, age 72, of Dallas, Georgia passed away August 19, 2021. Funeral Service will be held at 11:00 am on Tuesday, August 24, 2021 at West Cobb Funeral Home and Crematory in Marietta, GA. Interment will follow at Kennesaw Memorial... View Obituary & Service Information

The family of Kathleen Clonts Cherry created this Life Tributes page to make it easy to share your memories.

Send flowers to the Cherry family.