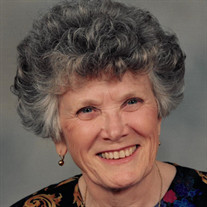 Kitty was born in Atlanta, GA on September 24, 1925 to her parents, M.H. and Bertie Bullard. She was the middle child sandwiched between two older brothers (Ralph and J. D.) and two younger sisters (Effie and Betty). Growing up during the depression, as with everyone during this time, they experienced the basic challenges of keeping food on the table. This need took the family to Lithia Springs, GA where they began farming to grow food to eat and share with others. Cliff Bruton was the lucky guy who won Kitty's heart and they were married in 1945. They bought their first home in Atlanta where their son, Terry, was born. A number of years later, their daughter, Vickie, was born and they moved to their new home in Mableton, GA where they would live for 39 years. The family attended Mayson Methodist Church in Atlanta until the church disbanded in mid-1960 and they transferred their membership to Faith United Methodist Church (now Covenant United Methodist Church) in Smyrna, GA. Cliff and Kitty were both active within the church where they continued to strengthen their abiding faith that carried them throughout their lives. Kitty worked at the Bell Bomber Plant and Chrysler before she was married but that ended when she became a mom! She did return to work when Vickie was finally in school at a jewelry company (that we can't remember the name of) but her career was with Revere Copper and Brass. At Revere, she loved what she did, loved her co-workers and that was the perfect example of "it's not work if you love what you do." She retired from the company when they closed the Atlanta Branch in the 1980's. Cliff passed away in 1984 and Kitty moved to Smyrna where she built the house that brought her joy and made her feel safe. She loved to garden and her green thumb cultivated beautiful flowers that filled her yard with glorious colors and allowed her to share that beauty with others. When her thoughts and memories became clouded with the ravages of Alzheimer's, she moved to Marietta to live with Vickie and Lon where she was for 11 years. As her mind and body continue to diminish, she received warm and loving care from a host of wonderful caregivers who loved her until the end. Karen Hawkins, Ann Marie Maragh, Michelle Spencer, Carolyn Heard and Sharon Kingston…we could not have traveled this journey without you. Kitty passed away at home on February 15, 2021 where her last days on this earth were surrounded with love and prayer. Kitty made this world a happier place and her bright light will continue to shine through the lives of the family she loved so much. Son: Terry Bruton (Candy); Daughter: Vickie Bruton Slack (Lon); Grandchildren: Taylor Bruton, Chase Bruton (Elizabeth), and Tanner Bruton. Great Grandchildren: Stella and Porter Bruton. A service to celebrate her 95 years will be held at Covenant United Methodist Church in Smyrna, GA on Sunday, February 21st at 2pm. The family will receive friends from 1pm until 2pm at the church. The service will be streamed live on the Covenant UMC Facebook page. In lieu of flowers, the family would appreciate a donation in her memory to the building fund at Covenant United Methodist Church (4336 King Springs Rd SE, Smyrna, GA 30082).

Kitty was born in Atlanta, GA on September 24, 1925 to her parents, M.H. and Bertie Bullard. She was the middle child sandwiched between two older brothers (Ralph and J. D.) and two younger sisters (Effie and Betty). Growing up during the... View Obituary & Service Information

The family of Emma Kathleen (Kitty) Bullard Bruton created this Life Tributes page to make it easy to share your memories.

Send flowers to the Bruton family.