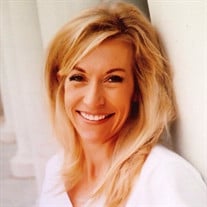 On April 30, 2021, at 8:43 pm, Karen Diane (Vaughan) Clark went to be with her Lord and Savior, after a ten-month battle with metastatic (stage 4) pancreatic cancer. She was 53 years old. Karen exhibited an immense will to live and fought with the utmost valor until the end. She passed away in her home in Cartersville, Georgia, surrounded by her husband, Eric Clark, her three boys, Harrison, Garrett, and Samuel Vaughan, and close family. Karen was born on November 14, 1967, in Elyria, Ohio to Judy and Glenn Kuntz. She was the middle of three children, with an older sister, Laura Luttrell (Mike), and younger brother, Cory Kuntz (Mary), who still reside in Dayton, Ohio. Growing up, Karen was a joyful child. She was a state-champion swimmer in her high school years and an accomplished pianist throughout her life. She looked forward to her annual family trips to Disney World and always enjoyed the vehicle perks of her father’s longtime employment with General Motors; she loved fast cars. Karen graduated with Honors from Church of the Open Door High School in 1985 and later attended Cedarville University to study biology. She then moved to Atlanta in 1987. On June 15, 1991, Karen married Barron (Barry) Vaughan in Atlanta, GA and they were later blessed with three incredible boys: Harrison (26), Garrett (23), and Samuel (22). Karen and Barry were active members of Johnson Ferry Baptist, Burnt Hickory Baptist and North Metro churches and were married for 19 years while they shared in the honor of raising their boys. Karen later married Eric Clark on May 24, 2020. The two originally met while attending Cedarville University, and later reconnected in 2018. Eric and Karen attended Sanctuary Church in Kennesaw, Georgia. In 2001, Karen was diagnosed with triple-negative breast cancer. After the unfavorable diagnosis, she fought relentlessly to achieve remission in 2003. Inspired by her experience overcoming breast cancer, Karen returned to school and earned a Degree in Nursing Sciences, and became a Registered Nurse in 2013. After starting her career on a cardiac unit with Wellstar Health System, she transitioned to working in Oncology at Kennestone Hospital, to dedicate her life to selflessly and compassionately serving cancer patients. During her time with Wellstar, Karen earned a promotion to charge nurse and countless awards for her care, including the Daisy Award, the highest honor for a Wellstar Nurse. Karen was so passionate about her work that she continued serving patients months after her diagnosis with pancreatic cancer and through her own intensive treatments. Karen was a woman with countless hobbies and ambitions. She spent much of her time expressing her creative side, through writing, reading, poetry, and music, even singing in a choir at Carnegie Hall in New York City with contemporary Christian artist Lauren Daigle in 2018. She was also a health enthusiast, always working out and staying up to date with the latest fitness research. But of all her ambitions, she had no greater joy than serving as Mom to her three boys. Whether it was traveling to baseball or soccer tournaments, celebrating academic achievements, or even just sharing a meal and reliving countless memories, Karen prioritized her three sons above all else and embodied what it meant to be a loving and gracious mother. Karen’s life was rooted in service. No matter who you were, what the situation was, or when you needed her, she would find a way to help. Her surviving family has created a fund to establish a memorial in her honor at Kennestone Hospital on the Oncology floor. Donations can be made directly to the foundation website in memory of Karen Vaughan Clark and her special oncology project. The living memorial will be called Karen’s Sanctuary. These donations will be included in the Kennestone Hospital General Purpose fund with a restriction to, “Karen Vaughan Clark Memorial Oncology project”. 1. Visit Wellstar.org/give 2. Click on “tribute” and enter Karen’s information 3. Select or designate the gift to Wellstar Kennestone Hospital and type in the comment box, “Karen Vaughan Clark Memorial Oncology Project” 4. If you have any questions, please call our Foundation Give Line at 470-956-4483. Donations can also be made to the “Karen Vaughan Clark Sanctuary Memorial” at gofundme.com/f/Karen-Vaughan-Clarks-Memorial-Sanctuary. Visitation will be held on Monday, May 3rd, from 4–6 pm followed by the Celebration of Life Service, at Karen and Eric’s home church. Address of Sanctuary Church: 700 Mars Hill Road, Kennesaw, GA 30152. Karen will be laid to rest at the Clark’s family cemetery in Charleston, WV on Saturday, May 8th. God is Great! My God is great! Yes, He is good! He loves me like no other could. When nights are long and without end; He’s the presence on which I can depend. When friends cause pain and do depart, He gently mends my broken heart. In times when solace does run and hide, He’s ever-present by my side. He gives me hope when mine is gone, He lends me strength to carry on. He binds my wounds; He heals my pains. He always listens; never complains. He guides my eyes with the purest of light. He calms my fears, He holds me tight. He provides for daily, my every need. He calls me in, in him only, to succeed. He imparts my dreams, my missions to fill; He promised me victory in His will. He says He loves me; I know tis true. He gave His son for me and you! He bore my cross, the scars of my nails. His love for me… it never fails! Even when my days on earth grow dim, I will ever louder sing to Him. My God, you’re great! Yes, You are good! Thank you for loving me like no other could! Karen Clark

On April 30, 2021, at 8:43 pm, Karen Diane (Vaughan) Clark went to be with her Lord and Savior, after a ten-month battle with metastatic (stage 4) pancreatic cancer. She was 53 years old. Karen exhibited an immense will to live and fought with... View Obituary & Service Information

The family of Karen Clark created this Life Tributes page to make it easy to share your memories.

Send flowers to the Clark family.