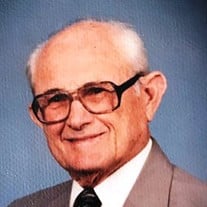 Julian W. Simms, 104, of Marietta, Georgia, passed away on Friday, January 15, 2021. A memorial service will be held Saturday, February 13, 2021 at 2:00 p.m. at Macland Road Church of Christ in Powder Springs. Interment will be held at a later date in Lebanon, Tennessee. Julian was born to Will and Elizabeth Simms on March 18, 1916 in Lebanon, TN. He was predeceased by his first wife, Louise Burton Arrington Simms and his second wife, Emma Barfield Simms. He is survived by his son, Bill and wife Janis, two granddaughters, Elizabeth Kendal Simms and Cathryn Arrington Alvis, two great-grandsons, Carter Alvis and Cameron Alvis. Julian graduated from Lebanon High School in 1936. He farmed and dabbled with all sorts of things, such as an early crystal radio set-the first in his area. He attended an aviation mechanic school in Nashville, TN and soon became employed at Lockheed Aircraft in Burbank, CA in 1941. He remained there as a defense plant worker during WW II and worked on the Lockheed Hudson, P-38, Constellation and Lockheed's first jet plane, the P-80. After the war, he returned to Lebanon and was in radio/tv business with his brother, Vincent. He went to Lockheed Georgia Company in Marietta to build C-130's, B-47's, Jetstars, Hummingbird vertical takeoff jet, C-141 Starlifters and C-5 Galaxies. He traveled with Lockheed and retired in 1976. He enjoyed retirement through those years until now. He tried everything. He took classes in sailing, lawnmower repair, bee keeping and travel. His first wife, Louise, died in 1966. He remarried and he and his second wife, Emma, traveled the world. He was an active member of Macland Road Church of Christ where he and Emma did a great amount of volunteer work. Online guest book at www.westcobbfuneralhome.com.

Julian W. Simms, 104, of Marietta, Georgia, passed away on Friday, January 15, 2021. A memorial service will be held Saturday, February 13, 2021 at 2:00 p.m. at Macland Road Church of Christ in Powder Springs. Interment will be held at a later... View Obituary & Service Information

The family of Julian Wesley Simms created this Life Tributes page to make it easy to share your memories.

Send flowers to the Simms family.