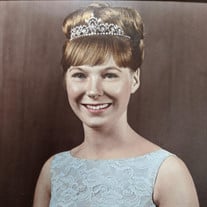 Judy Kay Cole (Robbins) was born on July 6, 1949, and was the oldest of three children to her parents, Louis and Donna Robbins. She grew up in Sequim, Washington and always remembered fondly the time she spent there on her family's and grandparents' dairy farms and strawberry fields. As a teenager, she attended Sequim High School and was a Princess in the annual Sequim Irrigation Festival. Judy moved to Seattle and attended the University of Washington and, later, Central Washington University, where she graduated with a degree in home economics in 1971. After graduation, she worked as a Home Economist for Washington Natural Gas and the Grant County Public Utility District where she created recipes, assisted with cooking demonstrations and local television shows, and taught customers and others how to manage homes and prepare meals using modern appliances and local ingredients. She was working at the Public Utility District office in Ephrata, Washington when she met her husband, Tucker Cole, a CPA with Price Waterhouse who was there conducting an audit. Tucker and Judy were married in Mercer Island, Washington on April 8, 1972. They had two children together, Bryan and David, and Judy decided to leave work and become a stay-at-home mom. She devoted her life to her family and her children, providing them with a wonderfully loving and supportive home. Tucker and Judy were original members of Overlake Christian Church in Kirkland, Washington. For years, Judy sang in the choir at Overlake and participated in its many seasonal productions, including its annual Living Christmas Tree. She also enjoyed playing the piano and volunteered as the chapel pianist at Overlake Christian School and Cedar Park Christian School where Bryan and David attended elementary school. When her children were older, Judy return to work as a Special Education Paraprofessional at Eastlake High School in the Lake Washington School District. Judy was diagnosed with multiple sclerosis in 1996 and bravely battled the disease for over 20 years. It slowly took away the use of her body, but never overcame her spirit and ability to touch the lives of others. Throughout it all and until her final days, Judy always amazed people with her positive attitude and cheerful smile in the face of adversity. Tucker and Judy moved to Peoria, Arizona in 2010 where Tucker cared for her until his passing in 2017. Judy moved to Marietta, Georgia in 2019 where she lived with her son, David, and his wife, Meredith, until her passing on December 30, 2019, after complications from pneumonia. Judy's family is ever thankful for the family and friends in her life, as well as for all the caregivers who provided daily care and quality of life to her over many years. She is survived by her two sons, Bryan and David; her four grandchildren, Hadley, Parker, Wesley, and Henry; her sister, Karen Norris; and brother, Larry Robbins. She is missed dearly, but will never be forgotten.

Judy Kay Cole (Robbins) was born on July 6, 1949, and was the oldest of three children to her parents, Louis and Donna Robbins. She grew up in Sequim, Washington and always remembered fondly the time she spent there on her family's and grandparents'... View Obituary & Service Information

The family of Judy Kay Cole created this Life Tributes page to make it easy to share your memories.

Send flowers to the Cole family.