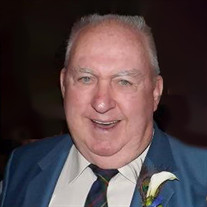 John Elmer Law, age 87, of Hiram, Georgia passed away November 29, 2020. Funeral Service will be held at 12:00 pm on Sunday, December 6, 2020 at West Cobb Funeral Home and Crematory Chapel in Marietta, GA. Interment will follow at Cheatham Hill Memorial Park in Marietta, Georgia. Mr. Law was born and raised in Burbank, California to Robert Bruce and Mary Amnet Law on September 12, 1933. During his high school years he moved to Bentonville, Arkansas and proudly played “Ironman” football. He served in the United States Air Force and was a veteran of the Korean War. Upon returning from Korea, he was stationed in Moses Lake, Washington where he met and married his wife Donna Lee Mullins. John’s career in security included positions with the United States Air Force Police, the Moses Lake State Patrol, and then after moving to California in 1959 he worked for Warner Brothers Studios before taking a position with Lockheed Martin Corporation, where he retired after 23 years. After retirement, John and Donna followed their grandchildren to Hiram, Georgia. John was a member of Holy Cross Lutheran Church in Hiram, the American Legion Post 294, and a member of a special bible study group brought together by faith but knitted together as family. He enjoyed working on cars, particularly the antique restoration of his favorite 1959 Chevy Apache Fleetside. Everyone who knew John, knew that his greatest joy was his family and friends and he especially loved being called “Papa” for the last 38 years. He is preceded in death by his wife of 62 years, Donna Lee Mullins; two sons, Bruce James Law and Russell J Law. He leaves behind four children: son, Allen Law, Los Angeles, California; daughter, Mariann Carlsen, Merced, California; daughter, Ruthann (Philip) Miller, Acworth, Georgia; son, John (SanDee) Law, Acworth, Georgia; and many grandchildren, great-grandchildren, nieces, nephews and a multitude of beloved friends and family. The family will receive friends on Sunday, December 6, 2020 from 11:00 am until 12:00 pm at West Cobb Funeral Home and Crematory in Marietta, GA. Online guest book at www.westcobbfuneralhome.com.

The family of John Elmer Law created this Life Tributes page to make it easy to share your memories.

Send flowers to the Law family.