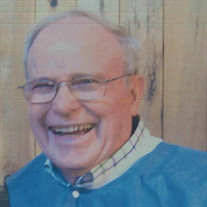 Dr. John E. Bush, D.D.S. P.C., age 92, of Marietta passed away peacefully at his home on Sunday, May 16, 2021. Services will be held at 1:00 p.m., Wednesday, May 19, 2021 in the Chapel of West Cobb Funeral Home and Crematory with Rev. Richard Hemphill officiating. Dr. Bush was born on April 6, 1929 to James and Ola May Bush in Vienna, GA. He attended Dooly High School and Berry College in Rome, GA. He proudly served two years in the United States Army. After leaving the military, he attended the University of Georgia and then Emory University of Dentistry where he was a member of Delta Sigma Delta. Dr. Bush opened his dental practice, John E. Bush, D.D.S. P.C., in the Oakdale Smyrna area in 1959 and moved to the Pat Mell Road location in 1972. He practiced there until 2014, when he retired at the age of 85. He was a member of the Northwest Dental Society, Georgia Dental Association, American Dental Association and the National Analgesia Society. He married Melba Tipton on February 17, 1979 and has been married for 42 years, making their home in Marietta. Dr. Bush attended Trinity Fellowship and was of the Baptist Faith. He was a wonderful and caring husband, father and grandfather and always put his family and patients first. He enjoyed life to the fullest. One of the many activities he enjoyed was flying after getting his Pilot's license. He also enjoyed motorcycle trips with his best friend, Dr. John Sandberg, square dancing, golfing with friends, walking and jogging with the love of his life (Sunshine), family time at the lake house and attending his grandson's sporting events. Dr. Bush selflessly devoted his life to serving others by donating to organizations that helped make life a better place to live for others. Dr. Bush was preceded in death by his parents, James Ollie Bush (1967) and Ola May Bush (1991); and brothers, Warren Perry Bush, Maurice Bush and Buford Bush. He is survived by his spouse of 42, years, Melba "Sunshine" Bush; children, James Lamar Bush of South Carolina and Ginger Lynn Bellinger of Gwinnett Co., GA.; grandchildren, Blake Bellinger and Brittney Bellinger, both of Gwinnett Co., Luke Travis Tipton and Zachary Lynn Tipton both of Winston, GA.; and his stepson, Stacy L. Tipton and his wife, Lauri Tipton. The family will receive friends Wednesday, May 19, 2021 from 12:00 noon until the time of service. Donations can be made in honor of Dr. John E. Bush to the Wellstar Foundation at www.wellstar.org/community/foundation/donate or The Lighthouse Family Retreat at www.lighthousefamilyretreat.org/give-now

The family of Dr. John E. Bush created this Life Tributes page to make it easy to share your memories.

Send flowers to the Bush family.