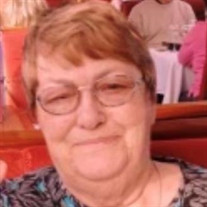 Johanna Kristen Williams Harrington, a devoted servant of Christ who lived her life to the fullest, passed away on Monday December 27, 2021 at age 85. Johanna was born July 21, 1936 in Oil City, PA to Norman and Edna Williams. She was an only child whose personality captured the hearts of her parents; it was a trait she carried throughout her life. A move to Colorado as a teenager fostered her great love of the outdoors. It was here as a young adult Johanna met and married the love of her life, David Lee Harrington. They went on to build a life together, raised four daughters, operated a small farm in Illinois and embarked on a multitude of adventures as a family. They were adventurers at heart - with a focus on boating. It started with a 20- foot tin boat, went on to a handcrafted cabin cruiser, a houseboat and a sailboat. Johanna became proficient at sailing as they ventured around the Caribbean for 5 years. Johanna was a devoted wife and mother, although she also worked occasionally outside the home. While she did not complete high school in her teens, she pursued a dream to attain her GED, and in her 70's she accomplished that goal. It was a source of pride for her and her family. Determination and persistence fueled Johanna in many areas of her life, and she taught these qualities to her children and grandchildren. She was known for her generosity and love of giving to others; Johanna gifted all those who knew her, not just with physical gifts, but the gift of her love and friendship as well. Johanna is remembered by all for her sharp wit and delightful sense of humor. She spoke her mind and could always be counted on to spark lively conversation; she was known for speaking what others might only be thinking. A quote by a dear friend was, "she always knew the right thing to say to me exactly when I needed to hear it." Although Johanna grew up in the church knowing God, it was later in life that she surrendered her life to Jesus. An acute awareness of the need for salvation was something she embraced and taught others. Her faith and boldness to share the salvation story was a source of inspiration for many. The light of Christ that shone brightly through her was a beacon of hope and encouragement for others in their spiritual walk. Johanna was preceded in death by her parents, her husband David Harrington and her daughter Jeanne Harrington. She is survived by three loving daughters, Jessica (John) Hutchins of Kennesaw, GA; Julie (Vincent) Leiyoole of Arsim, Kenya; Jill (John) Carr of Valley Springs, CA. Surviving grandchildren are Kristen Hutchins, Jason Hutchins, Adam Carr, Elizabeth Carr, Daniel Carr, Jeffrey Carr, David Maynard and Richard Chatfield. She is also survived by 13 great-grandchildren. At her request, Johanna will be laid to rest in a private graveside service with no visitation. A memorial celebration of life service will be held at Liberty Church in Marietta, GA on Thursday January 6, 2022. Johanna had requested that in lieu of flowers, donations be made to the Jesus film/Mobile Discipleship Training ministry done in Kenya. (Contact family for donation details at [email protected]) Online guest book at www.westcobbfuneralhome.com.

Johanna Kristen Williams Harrington, a devoted servant of Christ who lived her life to the fullest, passed away on Monday December 27, 2021 at age 85. Johanna was born July 21, 1936 in Oil City, PA to Norman and Edna Williams. She was an only... View Obituary & Service Information

The family of Johanna Harrington created this Life Tributes page to make it easy to share your memories.

Send flowers to the Harrington family.