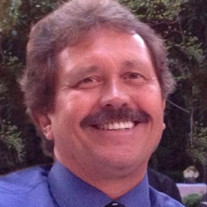 Joel Mark Coffman, age 62, passed away on Sunday, August 29, 2021 at Emory St. Joseph's Hospital in Atlanta, GA. Joel was born on May 30, 1959 in Levelland, Texas. He graduated from the University of Texas in 1984 with a Bachelor of Science degree in Geology. He held a geology license in four states- Texas, California, Nevada and Georgia. He was passionate about his work and committed to co-workers and friends during his employment. During his career Joel served as the Napa County Geologist in Napa, CA then a Physical Scientist for the Environmental Protection Agency, first in San Francisco Region IX, then in the Atlanta Region IV Water Division where he was also an interim Section Chief. On November 23, 2001 Joel married Susan Bowley Coffman, his high school sweetheart and the love of his life. Joel was a loving husband, proud father and grandfather (Poppy). He never stopped planning for his family and their life together. Joel was a lifelong learner and enjoyed talking about science, history and philosophy. Joel loved music from an early age and enjoyed guitar lessons as an adult. Music was a meaningful point of connection between Joel and his daughter Amber. Over the years Joel stayed in touch with friends near and far. He created and managed the Leaving Morton Facebook page, along with his neighborhood Millwood Farms Facebook page. Joel was a UT Longhorn football fan, who looked forward to watching Texas beat rival teams (Hook 'em Horns). He coached youth basketball in his 20s and 30s and later volunteered with the Best Buddies organization at Vanden High School, while living in Vacaville, CA. Joel was preceded in death by his parents Melvin and Nelda Coffman, mother in law Mona Kay Crow, brothers in law, Ed Bowley and Tim Miller. He is survived by his wife Susan, daughter Amber Coffman and her partner Jake Magee of Los Angeles, CA, step-daughter Shaina Blair and granddaughter Ana Rose Blair, of Mableton, GA; brother Marlon Coffman and wife Teresa of Brownwood, TX; sisters in law, Nola Miller of Roswell, NM and Zandra Bowley of Andrews, TX; nieces and nephews Brandon, Stephanie, Anderson, Faith, Alycia, Justin, Matt, Taylor, Alana, Johnny, and Brittany; great nieces and nephews Slay, Ryder, Lane, Colton, and Mylah; beloved Coffman and Nations cousins; father in law Noel Crow of Morton, TX; father and mother in law Noel and Connie Bowley of Ruidoso, NM. He leaves behind his faithful Golden Retriever, Bella, who he described as, "the best dog I ever had." Those fortunate enough to cross paths with Joel were disarmed by his friendly demeanor and riveted by his unique perspective. Joel had an infectious laugh and loved to tell stories. The family encourages those who knew and loved Joel to share their favorite stories of how he impacted their life. A memorial to celebrate Joel’s life will be held at a later time. The family invites donations in Joel’s memory to The Georgia Chapter of the Cystic Fibrosis Foundation @ https://www.cff.org/give-today or Hungry for Music @ https://hungryformusic.org/make-a-one-time-donation. The family also wishes to acknowledge and thank the physicians, nurses and staff at Emory St. Joseph’s hospital. "Love never fails. But where there are prophecies, they will cease; where there are tongues, they will be stilled; where there is knowledge, it will pass away. For we know in part and we prophesy in part, but when completeness comes, what is in part disappears…For now we see only a reflection as in a mirror; then we shall see face to face. Now I know in part; then I shall know fully, even as I am fully known. And now these three remain: faith, hope and love. But the greatest of these is love" (1 Cor. 13:8-10, 12-13). Online guest book @ www.westcobbfuneralhome.com

Joel Mark Coffman, age 62, passed away on Sunday, August 29, 2021 at Emory St. Joseph's Hospital in Atlanta, GA. Joel was born on May 30, 1959 in Levelland, Texas. He graduated from the University of Texas in 1984 with a Bachelor of Science... View Obituary & Service Information

The family of Joel Coffman created this Life Tributes page to make it easy to share your memories.

Send flowers to the Coffman family.