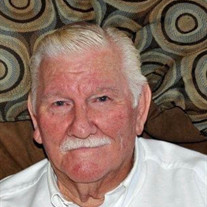 Jewett Junior Wellborn, age 91, of Marietta, Georgia passed away Friday, April 15, 2022. A Memorial Service will be held at 2:00 pm on Sunday, April 24, 2022 at John Petree Road Church of Christ in Powder Springs with Pastor Jessie Norman officiating. Born in Albertville, AL, Mr. Wellborn had lived in Cobb County for the past 70 years. He was a veteran of the United States Army, where he served in the Rangers as a Technical Sergeant. He retired from Lockheed after 36 years of employment. Mr. Wellborn was an ordained minister and pastor, and served at John Petree Road Church of Christ for many years. He also enjoyed hunting, fishing and the outdoors. He was preceded in death by his wife, Dola Dean Wellborn, and a son, Ricky Wellborn. Survivors include: Daughter, Pamela Garner, Marietta, GA; Son, Michael A. (Phyllis) Wellborn, Carrollton, GA; 5 Grandchildren, 5 Great Grandchildren, and 3 Great-Great Grandchildren. In lieu of flowers, donations may be made in Jewett Wellborn's memory to St. Jude Children's Hospital, or to John Petree Road Church of Christ. The family will receive friends on Saturday, April 23, 2022 from 6:00 pm until 8:00 pm at West Cobb Funeral Home and Crematory in Marietta. Online guest book at www.westcobbfuneralhome.com.

The family of Jewett Junior Wellborn created this Life Tributes page to make it easy to share your memories.

Send flowers to the Wellborn family.