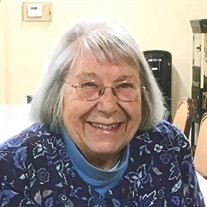 Jane L. Hughey, age 90, passed peacefully of natural causes at Cobb Wellstar Hospital on November 29, 2020. She had been a resident at Presbyterian Village Retirement Center in Austell, GA since 2013. Jane was born January 30, 1930 in Kent, OH to Lemoine D. and Grace M. Bradley. Jane was married to Robert N. (Bob) Hughey for nearly 63 years until his death in 2015. Jane was a 1948 graduate of Kent Roosevelt High School and earned a degree in nursing from St. Thomas School of Nursing in Akron. Later in life she became certified as a Nurse Practitioner specializing in women's health. Prior to starting and raising her family, Jane was an office nurse for Dr. Loren Baumgartner in Kent. She re-entered the work force part time as the TB nurse for the City of Kent Health Department and later worked summers at Sea World in their First Aid Center. She then joined Planned Parenthood where she passionately counseled young women to focus on healthy, preventive decisions in their sexual practices until her retirement in 1990. She and Bob then relocated to Keowee Key in Salem, SC. Jane was a loving wife, mother and grandmother. She served our God as a member of the United Methodist Church of Kent and St. Mark United Methodist Church in Seneca, SC. She was in charge of the Crib Room nursery at the Kent church for many years and served as a Stephens Minister and choir member at St. Mark. She put her nursing skills to good use on medical mission trips to Jamaica, Ecuador and China and regularly volunteered at the Rosa Clark Medical Clinic in Seneca. Jane loved spending time with her family, traveling, writing and playing bridge. All of her grandchildren remain grateful for introducing them to saving and investing following their 10th birthday. She seeded a small investment account for each grandchild and helped them with stock selections, tracking dividends and growth (and sometimes loss). Many family members and friends remember her as a wonderful cook. She was gentle and compassionate and a selfless caregiver to Bob in his final years as he struggled with Parkinson's disease. Jane is survived by her children, Jim (Jackie) of Marietta, GA, Robin (Joe) Squatrito of Colorado Springs, Paul (April) from Spring Hill, TN, David of Munroe Falls and Rick (Nancy) of Ellicott City, MD. She is also survived by her sister, Barbara (Lyman) Klewe of Akron and grandchildren Chelsea (Trey) Bodenhamer, Laura (Spencer) Klagstad, Stacey and Michael Squatrito, Samantha (Cory) Wence, Jessalin (Nick) Yorlano, Jake (Marisa) Hughey, Tyler and Braeden Powell and Curtis and George Hughey. She leaves two great-grandchildren, Layla Powell and Jackson Bodenhamer. A memorial service will be planned at a later date. The family has asked that any memorials be made to the Presbyterian Village Caring Hands Fund at www.phgainc.org/donate/ . Condolences will be forwarded to the family by the funeral home www.westcobbfuneralhome.com.

Jane L. Hughey, age 90, passed peacefully of natural causes at Cobb Wellstar Hospital on November 29, 2020. She had been a resident at Presbyterian Village Retirement Center in Austell, GA since 2013. Jane was born January 30, 1930 in Kent,... View Obituary & Service Information

The family of Jane Louise Hughey created this Life Tributes page to make it easy to share your memories.

Send flowers to the Hughey family.