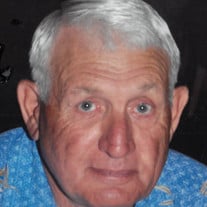 James Edward O'Neal, Sr. (Jim), age 76, of Marietta, Georgia passed away Friday, July 24, 2020, at his home in Marietta, Georgia. The family will receive friends on Friday, July 31, 2020, from 10:00 a.m. until 12:00 p.m. at West Cobb Funeral Home and Crematory in Marietta, Georgia. Funeral services will be held at 12:00 p.m. with Dr. Philip West officiating. A Private Interment will follow at Georgia National Cemetery in Canton, Georgia. Jim was born in Gadsden, Alabama to James and Louise (Arrington) O'Neal on May 29, 1944, where he lived until 1962 when he moved to California. After discovering his love of the sand and salt water, he became a certified lifeguard. In 1967 Jim enlisted in the Army serving 3 years and receiving an honorable discharge as a Vietnam War Veteran. During his service to his country, he received honor for 4th Specialist Training Brigade and Basic Combat Training. In the last 6 months of his service he had the privilege of being part of the Honor Guard where he escorted fallen Soldiers home and notified their families. After leaving the military, he began his career with the City of Roswell as the Superintendent of Traffic and retired in 2006 with 22 years of service. Jim always enjoyed helping others repair and renovate their homes. This motivated him to open a home restoration business that he owned and operated for 10 years, before officially retiring. Jim met and married his wife, Nancy O'Neal, in June of 2014. They shared a home, family, and life together in Marietta, Georgia. He was an avid fisherman and loved all things fishing. Jim had even invented a product for fishermen like him that could fish from sunrise to sunset, but needed the occasional shady spot called "The Shady Fishermen." When he wasn't fishing, he could be found tinkering with his boat or in his garage readying his extensive collection of fishing gear for his next adventure. Jim loved nothing more than time spent with his children and grandchildren, celebrating the special occasions and achievements in their lives. Jim is survived by his wife, Nancy O'Neal; former spouse and mother of his children, Espe O'Neal; children, Jim O'Neal (Stephanie), Mandy (O'Neal) Walters (Cameron), Jamie Anderson, Troy Clark (Nicole), Kim Skelton (John), and Stacy Ball (Charlie), grandchildren, Devan Sprayberry, Dustin Sprayberry, Savanna Mitchell, Collin O'Neal, Eryn Anderson, Caden O'Neal, Olivia Walters, Stella Walters, Lillie Kate Clark, Camilla Walters (unborn); and great-grandchildren, Carter Dover, River Sprayberry and Caylin Dover; and brothers and sisters, Harold O'Neal (Pat), Carol Bryant (Jim), Ann Jordan (Larry). Jim is preceded in death by his father, James Earon O'Neal, step-father, John Shelton Holder, mother, Louise (Arrington) Holder and grandson Drew Dover. Pallbearers will be: Collin O'Neal, Cameron Walters, Troy Clark, Larry Jordan, Jr., Clint Jordan, Ricky Price, Paul Tallman, and Stacy Humphrey. In lieu of flowers, memorial donations may be made to Disabled American Veterans at www.dav.org. Complete obituary and online guest book at www.westcobbfuneralhome.com .

The family of James Edward O'Neal, Sr. created this Life Tributes page to make it easy to share your memories.

Send flowers to the O'Neal family.