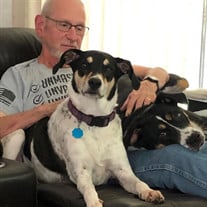 James Bryant Lindsay, age 70, of Powder Springs, Georgia passed away Tuesday, February 22, 2022 at Wellstar Cobb Hospital in Austell, GA. A Memorial Service will be held at 4:00 pm on Saturday, February 26, 2022 at McEachern Memorial United Methodist Church in Powder Springs. The family will receive friends after the ceremony. He was born on October 31, 1951 in Atlanta Georgia to James Wesley Lindsay and Ruth Mullinax Lindsay. Bryant grew up in Austell Georgia, and graduated from South Cobb High School in 1970. He worked summers at Six Flags over Georgia in the food and beverage department. After high school, he attended Kennesaw college for a year; and Emory Law School for a year. He worked for Arrow Shirts for 19 years; sold Life Insurance with AL Williams for several years; and studied with Waddell & Reid Investments. He had his own handyman business for 10 years. His final job was his favorite, the Art & Sign Department at Six Flags over Georgia for 13 years. Here, he was able to do what he liked best: working outside, working with his hands, being creative, using his artistic abilities, and making things. And the best part was working in close proximity with his little brother Mark, who is in the Security Department. He enjoyed many hobbies, including drawing, painting, writing, and reading all types of books, including everything from Seminary level theology to Zen, martial arts, history, books on healthy living, or political science. He was a history buff, specifically interested in the American Revolutionary War era. And he loved vacations in Mexico Beach, Florida; and loved every dog he ever met. Bryant is survived by his wife of 37 years, Vicki Gay Lindsay, his son, James Robert Lindsay (Aaron) of Columbus, Ohio; his sister, Janice Lindsay Robinson (David) of Powder Springs Georgia, his brother Mark Wesley Lindsay (Lisa) of Douglasville, Georgia, and many neices & nephews. Bryant was preceded in death by his parents, James Wesley Lindsay and Ruth Mullinax Lindsay.

The family of James Bryant Lindsay created this Life Tributes page to make it easy to share your memories.

Send flowers to the Lindsay family.