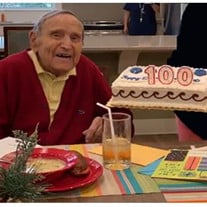 James Robert (Bob) Chumley Jr. age 100, of Marietta GA, formerly of Big Canoe GA, passed away April 26, 2020. A private funeral service will be held at West Cobb Funeral Home and Crematory in Marietta GA. Interment will follow at Georgia National Cemetery in Canton GA. Mr. Chumley was preceded in death by his wife of 74 years, Louise Chumley; and his parents, James Robert Sr. and Pauline Chumley. Bob was a native of Tennessee, residing in Memphis, until relocating to Georgia in 1968. Born in 1919, he was a child of the Great Depression and thereafter, always kept a kind, frugal, and unassuming nature. As a young adult, he joined the Army during WWII, serving as a Tech Sergeant in Africa and Italy. After the war, he returned to Memphis, married the love of his life, Louise, and raised two sons. He was a loving, dedicated husband for 74 years, and a wonderful father, grandfather, great-grandfather, and uncle. Mr. Chumley had a long career with PPG Industries, both in Memphis, and later as branch manager in Atlanta. Upon retirement, he and Louise moved to Big Canoe GA, where they lived for 30 years. He loved playing and watching golf, vacationing on Hilton Head island, and for all his able years, was a gifted and willing handyman. Always honest and dependable, he was a great example by which to live. Since the loss of his wife just one month prior to his death, his wish was to be with her again, which is now granted. He is deeply loved and missed by his entire family. In his last years, he was beloved by his caregivers as well. Survivors include: two sons: Robert (Josie) Chumley of Cumming GA; James (Donna) Chumley of Acworth GA and; four grandchildren: Rachel, Austin, Evan and Frank; three great-grandchildren: Hudson, Grant and Morgan. In lieu of flowers, donations may be made in Bob Chumley's memory to Samaratan's Purse at www.samaratanspurse.org/donate

The family of James Robert Chumley Jr. created this Life Tributes page to make it easy to share your memories.

Send flowers to the Chumley family.