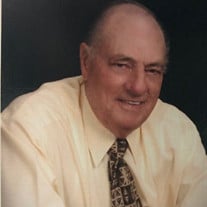 Watch the service on Facebook at 2pm on Monday, April 13, 2020 @ https://www.facebook.com/events/1007105256350349/ Mr. James Gordon Brown age 80 of Marietta, Georgia passed away of natural causes on Wednesday, April 8, 2020. Mr..Brown was born on May 7, 1939 in Greenback, TN. He is the oldest son of the late Arthur N. Brown, Sr. and Carrie Mae Petty Brown. James was a long-time employee of Bristol Myers-Squibb before retiring in 1994. During his retirement years, James enjoyed fishing with friends, wood-working and spending time with his grandchildren. He was a devoted husband and godly father. Dedicated his life to Christ and served as a deacon and Sunday School teacher since 1977. Affectionately known as "Papa" by his grandkids, he will forever be remembered as a loving father, brother, husband, grandfather, uncle, and friend. James is preceded in death by his bride, Barbara Holder Brown, of 52 years who died Jan. 26, 2012. He is survived by his two daughters: Jama (Brown) Heckler and his son-in-law Jerome Heckler and grandson, Noah Sims and granddaughter, Bailee Heckler: Nikki (Brown) Ginn and son-in-law Jeff Ginn, grandsons: Bryce Cargal and Jace Ginn, and granddaughter Sarah Ginn. James is also survived by his loving sisters, Wanda Brown Clark and Linda Brown Ellis of Maryville, TN. Preceded in death by brother Arthur Brown, Jr. and sisters Dorothy Brown Berrong and Phyllis Brown Jones also of Maryville, TN. ; as well as a host of brother and sister-in-laws, cousins, nieces, nephews and friends. James' beautiful life and loving memory will forever be cherished and he will be deeply missed by his friends, family, and all who knew him. A memorial service will be held in the future when the time is appropriate.

Send flowers to the Brown family.