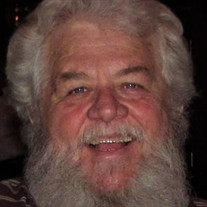 James William Austin, age 69, passed away on March 21, 2020. Private funeral services will be held due to state mandated health restrictions. James is a native of Georgia, being born in Atlanta, growing up in Alpharetta, attending Milton High School, and spending most of his years raising his family in Marietta and Dallas, GA. His career included work at Georgia Power, selling Life Insurance, owner and operator of the residential and commercial painting company Statewide Painting, and being an immeasurable spreader of joy as a professional Santa Claus. In his younger years, James was the best catcher in little league and was a great football player. His abilities were not limited to just sports; artistic talents likely passed down from his father included playing the trumpet, painting, and stained glass sculptures. James lived life to the fullest, with interests that included scuba diving, cooking, gardening, movie watching, and adventurous motorcycle trips with his wife. None of his hobby interests though exceeded the love for his family. James had a devotion to his wife, family, and friends that was rivaled by no other. This was evidenced by his membership in the Masonic Fraternity, being a member of the board of trustees at Hiram First United Methodist Church, his continuous service to the community through his church and neighbors, and the relentless sacrifice and steadfast love he gave for his family. James also had an enormous heart for dogs, all of which under his care receiving much love and abundant scraps. James was preceded in death by his parents Hubert James and Sara Lou Austin. He is survived by his loving wife of 40 years Susan Anne Austin; sisters Amelia Austin and Sharon (Don) Franklin; daughter Lora (Brant) Griewisch; son Rick (Melissa) Caveney; daughter Lisa (Ryan) Manchee; son Zachery (Sofia) Austin; grandchildren Erica Thomas, Kaitlin (Tommy) Thompson, Trey Griewisch, Sophia Caveney, Benjamin Caveney, Grayson Manchee, Kyle Austin, Sara Caveney, Charlie Manchee; and great grandchildren Braelyn Thomas, Cage Thomas, and Tatum Thompson. In lieu of flowers, donations may be made in James Austin's memory to Hiram First United Methodist Church. Based on extraordinary circumstances currently surrounding the public health crisis, a celebration of life service will be scheduled and announced at a later date.

James William Austin, age 69, passed away on March 21, 2020. Private funeral services will be held due to state mandated health restrictions. James is a native of Georgia, being born in Atlanta, growing up in Alpharetta, attending Milton... View Obituary & Service Information

The family of James William Austin created this Life Tributes page to make it easy to share your memories.

Send flowers to the Austin family.