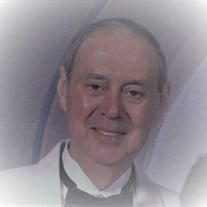 Dr. James Wade Ash, age 86, of Powder Springs, passed away on December 15, 2021. Funeral services will be held at 11am Saturday, December 18, 2021, at the First Baptist Church of Powder Springs with Rev. Mike Woods and Rev. Alan Davis officiating. The family will receive friends on Friday, December 17, 2021 from 5:00 until 8:00 pm at West Cobb Funeral Home, 2480 Macland Rd. SW, Marietta, GA 30064. He was preceded in death by his parents, Mr. and Mrs. Benjamin Wesley Ash, Sr., his daughter, Barbara Ruth Ash, sisters Ruth Ash Parker, Barbara Ash Anderson, brother Ford Ash, and sons-in-law Tom Bell and Danny Carney. Survivors include wife, Martha "Boots" Sloan Ash, daughters Mary Ash Rhodes (Barry), Rebecca Ash-Allen (Chuck), Susan Bell Coker (Mark), grandchildren Jamie Rhodes, Julie Bell Rhetts (Adrian), Stephanie Rhodes Foreman (Patrick), great-grandchildren Julian Rhetts and Evan Rhetts, brother Ben Ash, Jr (Alice), sister-in-law, Marie Ash, and several nieces and nephews. Wade was born on April 30, 1935 in White County, GA. He graduated from Lumpkin County H.S. in 1953. He continued his education at North Georgia College with a B.S. Degree in Education, a Master's Degree from New York University, an Educational Specialist Degree from Georgia State University, and a Doctorate in Educational Leadership from Vanderbilt University, with additional graduate study at the University of Georgia. His motto was "never stop learning". Dr. Ash began his career as an educator in his hometown of Dahlonega, GA., immediately following graduation from North GA. College. He also served as an elementary school Principal in Bartow, Carroll, and Cobb County, GA. In 1965, he joined the staff of West Georgia College in the Department of Adult Education and Director of the Carroll County Headstart Program. He also served in the Cobb County School System as Director of the Early Childhood Program and as Community School Director. Following retirement from Cobb County in 1993, he taught at Kennesaw State University and Shorter College for ten years for a total of 43 years in the field of education. Wade was a member and deacon of First Baptist Church, Powder Springs, GA. He served on many committees and taught Sunday School classes. Wade maintained an interest and was involved in community affairs. He served on the Powder Springs City Council and was a founding member of the Powder Springs Kiwanis. As a Kiwanian, he served as Distinguished Charter Club President, Secretary and Member of the Board of Directors, Distinguished Lt. Governor of Division 15, and the Georgia Kiwanis Memorial Foundation Board of Directors. Dr. Ash received many awards for his service, including the Outstanding Georgia Kiwanian and the Georgia District Leadership Medallion. He was also an active participant in the Democratic Party. He served as Chairman of the Cobb County Democratic Committee, a member of the Georgia State Democratic Executive Committee, and a member of Congressman Buddy Darden's Advisory Committee. He also served as a charter member of the Cobb County Human Relations Council and the University of Georgia Extension Service Advisory Board for several years. Dr. Ash proudly served his country on active duty with the U.S. Army for two years in a classified assignment, followed by four years of active reserve duty. He served for twenty-five years as a member of the Selective Service Board No. 7 for Cobb and Douglas County. Wade and Boots were avid travelers. Their travels carried them to six continents. They visited all 50 states and made many trips to Europe with family. To celebrate fifty years of marriage, they went to Australia and New Zealand. In addition to traveling around the world, they sailed on cruises in the Irish, Caribbean, Mediterranean and North Seas, Panama Canal, Atlantic and Pacific Oceans. Beautiful flowers, easy listening music and fine art were a prominent part of Wade's cultural interests. But his greatest joy was spending quality time with his children, grandchildren, extended family members, and friends. An online guest book is available at www.westcobbfuneralhome.com

The family of Dr. James Wade Ash created this Life Tributes page to make it easy to share your memories.

Send flowers to the Ash family.