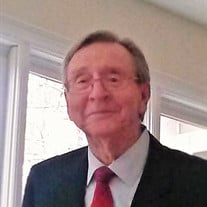 Jack Andrew Townsend, age 85, of Acworth, Georgia, passed away peacefully at his home the morning of April 21, 2020 surrounded by his family, loyal dog Cheyenne and sweet cat Smoke. A Memorial Service will be held Saturday, August 29, 2020 at 12:00 noon at Macland Baptist Church with Rev. Mike Woods officiating. A private graveside service was held Friday, April 24, 2020 at Peaceful Meadows Cemetery in Dallas, GA. Jack was preceded in death by his parents Andrew and Pearl Townsend, brother Jerry Townsend and beloved son and sidekick Danny Townsend. Jack was a lifelong resident of Georgia, attending West Fulton High School - Class of '53, of whom many are still close friends throughout all these years. Jack met Patricia McDaniel in 1954; their love story has lasted 67 years. Jack and Pat had 3 wonderful children, 3 wonderful grandchildren and one sweet great-grandson. Jack began working with Colonial Stores in high school, moving on to Atlanta Water Works in the early 50's. During this time he served in the Army and subsequently the National Guard. In 1960, Jack went to work for Metropolitan Life Insurance Company becoming a top producer and winning many awards and trips. Due to his success, the opportunity arose for him to join Cumberland Insurance Agency and branch out into other lines of Insurance. This ultimately led to Jack opening his own agency - the Northwest Insurance Agency which he ran successfully until he retired in July 2002. From a very young age, Jack really enjoyed playing basketball and baseball. In his later years, he enjoyed collecting and restoring Antique and Classic Cars, winning several trophies. Jack was known for his loyalty, his honesty, his word, and his sense of humor - he loved to be mischievous. He was affectionately called the 'Dog Whisperer' because all dogs were immediately drawn to him. He was so very loved and will be missed by his family and friends. He is survived by his loving wife Patricia Townsend of 67 years, daughters Jackie R. Townsend and Melanie A. Moody, grandchildren Lindsay Mills, Kyle Townsend and Hailey Townsend, great-grandson Rylen Weaver, sister-in-law Charlene Townsend, and several nieces and nephews. In lieu of flowers, you may send contributions to the American Cancer Society or St. Judes Hospital. Online guest book at www.westcobbfuneralhome.com.

Jack Andrew Townsend, age 85, of Acworth, Georgia, passed away peacefully at his home the morning of April 21, 2020 surrounded by his family, loyal dog Cheyenne and sweet cat Smoke. A Memorial Service will be held Saturday, August 29, 2020 at... View Obituary & Service Information

The family of Jack Andrew Townsend created this Life Tributes page to make it easy to share your memories.

Send flowers to the Townsend family.