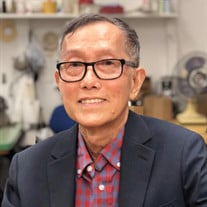 It is with the greatest sadness that we announce the passing of Hu Taing, 70, of Kennesaw, Georgia on December 6, 2020 after a hard fought battle with lung cancer. He has joined his heavenly father and is at peace. Visitation will be held at the Chapel of West Cobb Funeral Home Marietta, GA on Thursday, December 10, 2020 from 9-11AM with a funeral service following at 11AM. For those unable to attend, there will be a livestream of the funeral service. Please refresh this page for the live stream link at 11AM. A recording will be provided at a later time. Hu was born in Kampot, Cambodia. He survived the brutal killing fields of the Khmer Rouge regime and immigrated to the United States in 1980. He had his hands in many different trades, but his passion and talent was in tailoring. He retired as a master tailor from Neiman Marcus in 2019 after 20 years of service. He served as the Vice President of the line dance club at the Chinese Cultural Center in Atlanta. An avid traveler, he could be found in any corner of the world discovering new sights sharing memorable moments with friends and family he loved most. He loved ballroom dancing, tai chi, fishing, tennis, ping-pong, karaoke and cheering on the Atlanta Braves. His legacy and his memory will live beyond his years for all that he has contributed to the lives of many. Hu is survived by his wife, Vuoch Taing; brother Oang (Eng) Tan; loving children, John (Helen) Taing, Nary (Kat) Laocharoen, May (James) Evans, Lee (David) Lu, Jou (Pierce) Spitler, Jane Taing; grandsons: Brandon, Derek, Hunter, Jacob, Nathaniel, Jude, Nicolaus; and many nieces and nephews. He was preceded in death by his father, Kheng Yim Taing; mother, Yung Sun Heng; brother, Yeav Taing; sisters, Tah Muy Taing, Ngo Muy Taing, Nong Muy Taing, Keak Muy Taing and Tu Muy Taing; and son, Pros Meas Taing. In lieu of flowers, donations may be made in Hu Taing's memory to American Lung Association at http://action.lung.org/goto/HuTaing.

It is with the greatest sadness that we announce the passing of Hu Taing, 70, of Kennesaw, Georgia on December 6, 2020 after a hard fought battle with lung cancer. He has joined his heavenly father and is at peace. Visitation will be held at... View Obituary & Service Information

The family of Hu Taing created this Life Tributes page to make it easy to share your memories.

It is with the greatest sadness that we announce the passing...

Send flowers to the Taing family.