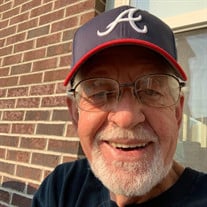 On Sunday, June 19, 2022, Howard Duffie Henslee passed away peacefully at home, surrounded by his family. He was born on April 11, 1948, in Atlanta, Georgia to Miles Duffie and Opal Faye (Smallwood) Henslee. Howard was a mischievous child. He tormented his sisters and pranked his parents. Despite this, they remained a close and loving family! Howard joined the Navy one day after he turned seventeen. As a commissaryman (now called “Culinary Specialist”), he specialized in baking, both at sea, and on shore duty. In his nearly five years in the Navy, he accrued about 2.75 years of sea service. He was stationed at Great Lakes (Chicago) for boot camp, then served two years on the USS Springfield (CLG-7), a guided-missile cruiser that served as the flagship of the Atlantic Fleet. He was next stationed on the USS Columbus (CG-12) for another Mediterranean deployment. He finished his Naval career at Naval Training Center Orlando, where he was a plankowner. Curiously, his son, Jason, and daughter-in-law, Dawne met at NTC-Orlando in 1991! During his time in the Navy, Howard wrote and received hundreds of letters. He was known for his poetry! After the Navy years, Howard really enjoyed his career with Georgia Crown Distributors. As he was estranged from his son’s mother, he spent a lot of time with his numerous nieces & nephews. He met the love of his life, Cheryl Lynn Lancaster, later in life, and nursed her through her final years. In retirement, he took up estimating and building fences with his nephew’s fence company, Nix Fencing, and particularly enjoyed playing poker with assorted male relatives and watching the Braves win the World Series. Howard was preceded in death by his father, Miles Duffie Henslee, his mother and stepfather Opal Faye (Smallwood) and Albert Price, his sweetheart Cheryl Lynn Lancaster, his sister and brother-in-law, Mr. and Mrs. Jack and Pansy Long, and four beautiful nieces who were gone too soon, Rhonda Kay Nix, Wanda Bell, Crecenda (Chris) Paradis, and Kristie (Kevin) Brooking. He is survived by his son, Jason (Dawne) Pamplin, grandchildren Sarah (Jake) Kepler, Hannah (Patrick) Hogan, Timothy (May) Pamplin, and Beck Pamplin, two great-grandchildren due to arrive in the fall, sisters Gina Paradis and Brenda (Phil) Hembree, nieces & nephews William (Carol) Nix, Laura Doering, Chris Paradis, Kevin Brooking, Keith (Holly) Brooking, Rachel (Dennis) McNulty, and David (Morgan) Hembree, as well as many greatnieces and -nephews. Family and close friends are invited to a short interment service at Brooks Assembly of God (7401 Newnan Road, Brooks, Georgia) at 10:00 am on Saturday June 25, 2022. This will be followed at 11:00 am by a luncheon celebration of Howard’s life at Curious Kitchen (42 Main Street, Senoia, Georgia). Dress is casual. In lieu of flowers, memorial contributions may be made to the Atlanta Braves Foundation. Speak to Jason or Dawne if you want to chip in on a commemorative brick at Truist Park.

On Sunday, June 19, 2022, Howard Duffie Henslee passed away peacefully at home, surrounded by his family. He was born on April 11, 1948, in Atlanta, Georgia to Miles Duffie and Opal Faye (Smallwood) Henslee. Howard was a mischievous child.... View Obituary & Service Information

The family of Howard Duffie Henslee created this Life Tributes page to make it easy to share your memories.

Send flowers to the Henslee family.