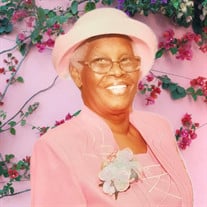 Hortence Anita Pusey, age 92, of Powder Springs, Georgia passed away February 24, 2022. Funeral Service will be held at 11:00 am on Saturday, March 12, 2022 at West Cobb Funeral Home and Crematory Chapel in Marietta, GA. The family will receive friends on Saturday, March 12, 2022 from 10:00 am until 11:00 am at West Cobb Funeral Home and Crematory in Marietta, GA. Mrs. Hortence Anita Pusey, affectionately known as Mom Pusey or Sister Pusey was born to Wilford Rodney and Rosetta Wright on March 16, 1929 in Ginger Hill, St. Elizabeth, Jamaica. She moved from Ginger Hill when she was 4 years old. She grew up and attended Giddy Hall School in Prospect, St. Elizabeth, Jamaica. As the eldest sibling, she took on the role as the senior go-to in the family early, and eventually became our Matriarch. In her earlier years she worked in Maggoty and Malvern as a homecare provider. She wanted more and then moved to Black River to work as a ward clerk at Black River Hospital in Jamaica. You would often see her hopping on her bicycle going to and from work, shopping, church and errands waiving and saying good morning or good evening to everyone she passed. In her spear time as a seamstress, you could often see her at the sewing machine sewing wedding dresses, special order dresses for clients and making sure her family was will dressed. In 1968 she decided to take a leap of faith, as she trusts the Good Lord in all she did. She ventured to the United States in hope of finding more opportunities for her family. She was joined by her husband and three of her children 3 years later. Mom Pusey continued to work in the healthcare field as a nurse’s aide in the United States at White Plains Hospital for 24 years. Sister Pusey was saved in October of 1976, when she became the First Fruit of the newly formed Tabernacle Full Gospel Church at the YMCA on Mamaroneck Ave in White Plains, NY. She was a missionary, an evangelist, a prayer warrior, and a lover of people, she cared for the sick and those in need. She would help organize yearly fundraising bus trips, asked every one for donations for the yearly convention funds to help her growing church. You would often hear her say, when she got push back “This is for God’s house nothing is too small”. After retiring in 1994, she and her husband decided to return to their beautiful home they expanded and updated in Jamaica. Traveling each year in 6 months interval back and forth to avoid the winter months in the U.S. She would ask for clothing donations and send 5-6 barrels of clothes and food to distribute yearly to those less fortunate in her community in St. Elizabeth, Jamaica up until 2018. She was a well-established, an avid member and participant in her churches, their families and missions in Jamaica and the United States. Mom Pusey moved from White Plains NY to Powder Springs GA in August 2001 with her daughter and family, to joined her eldest son & family in GA. If Mom Pusey knew you, she feed you. She feed the masses, always cooking and making sure if you visited her home, you were leaving with a full stomach. She was widowed from her husband Stanley Pusey after 53 years of marriage in 2003, but her love of God did not slow her down as she continued to travel and help those in need throughout the rest of her life. Mom Pusey is praising and celebrating with her husband, Stanley Pusey: Mother, Rosetta Wright: Father, Wilford Rodney: Brothers, Charles Brown, Clifford Dennis: Daughter, Annette Pusey and a host of family, friends and church family. Mom Pusey is survived by her, Siblings: Julie Robinson, Janis Goulbourne, Joyce Robinson, Daniel Rodney, Herbert Rodney. Children: Macki Senior, Vioris Brown, Delroy Pusey, Jacqueline Worrell. Step-Sons – Dalton Pusey & Winston Pusey Grandchildren: Mark, Michael, Monica, Dennis, Trisha, Miquel, Christine, Nicole, Jawfal, Shamou, Dalia, Natyleia, Shamena, and Safra Great Grand Children: Thirty-Eight Great-Great Grand Children: Five Online guest book at www.westcobbfuneralhome.com.

Hortence Anita Pusey, age 92, of Powder Springs, Georgia passed away February 24, 2022. Funeral Service will be held at 11:00 am on Saturday, March 12, 2022 at West Cobb Funeral Home and Crematory Chapel in Marietta, GA. The family will receive... View Obituary & Service Information

The family of Hortence Pusey created this Life Tributes page to make it easy to share your memories.

Send flowers to the Pusey family.