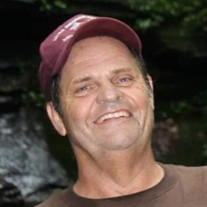 Henry Wayne "Balljoint" Foster, age 75, was born to John Henry Foster and Sara Nell Fraser on October 13, 1946. He went to be with the Lord on March 15, 2022. A Memorial Service will be held at 2:00 pm on Monday, March 21, 2022 at West Cobb Funeral Home and Crematory in Marietta with Dr. Randy Cheek officiating. The family will receive friends one hour prior to the ceremony at the funeral home. He will be interred at the Georgia National Cemetery in Canton at 11:30am on Wednesday, April 6, 2022. The funeral procession will leave the funeral home at 10am on April 6th for those who want to attend the committal service. Wayne worked for Atlantic Steel Company until his retirement in 1998. His hobbies included camping, fishing with his best friend, Halton, and standing as Flag Wagon with the Patriot Guard Riders. He was a Christian, and for most of his life, attended Olive Springs Baptist Church. He graduated from Osborne High School and was an Air Force Veteran. He was one of the few people who could be called a true patriot. He was preceded in death by his parents, his son, Christopher, and his brother, Jim. Survivors include: Wife of 46 years, Debby Foster; Daughter, Mendy; Brother, Harry (Carole) Foster; Sister-in-Law, Sandy (Mike) Aycock; Nieces, Lauren (Duane) Ferree, and Christina Aycock; A Nephew, Michael Kennedy, and Eric Watts, Jr. Online guest book at www.westcobbfuneralhome.com.

The family of Wayne "Balljoint" Foster created this Life Tributes page to make it easy to share your memories.

Send flowers to the Foster family.