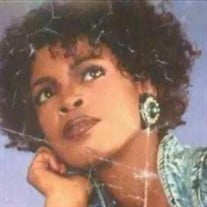 Mrs. Helen left this earthly realm on July 18, 2021 and gained her wings. Funeral Services will be held at 1pm on Saturday, July 31, 2021 at Burnt Hickory Baptist Church in Powder Springs with Rev. Matt Petty officiating. The family will receive friends on Saturday, July 31, 2021 from 12pm until 1pm at Burnt Hickory Baptist Church. It would be wrong to say that Mrs. Helen lost her battle because she never stopped fighting. Mrs. Helen was born June 26, 1959 in Jersey City, NJ. Born to the parents of Earnest and Earlene Tiller. Mrs. Helen attended and graduated Henry Snyder High School. She also attended and completed Drake Business School where she was awarded her gift in public speaking. She then matriculated in her studies and then attended a prestige college, Howard University. She earned a Master’s in Accounting and Computer Science. Mrs. Helen was very passionate about education and will be remembered for her legacy of learning. She was also very gifted to write poetry. Mrs. Helen lived in the Netherlands for seven years and later visited Germany. Her passion for education and learning lead her to learn different languages, of which she spoke seven. During her career she worked for U.S. Customs, Prudential Insurance Company, and lastly, Bank of America. Most importantly, Mrs. Helen loved the Lord. She was a soul winner for Christ and even through great illness, she remained faithful and fought the good fight of faith until the end. Before giving her life to the Lord, Mrs. Helen had a passion for singing and modeling. She was beautiful inside and out. She was later called by the Lord and began Pastoring while in the Netherlands. After returning from the Netherlands, she met and married Forest Hall, Jr. They then migrated to Kennesaw, Georgia from Youngstown, Ohio where they both became active members at Burnt Hickory Baptist Church and remained. She was predeceased by her father and brother, Earnest Tiller, Jr. She is survived by her husband Forest Hall Jr., her mother Earlene Tiller, children Shawnte L. Tiller of Newark, N.J., step-children Robin Hall Perez and Bill A. Hall of Warren, Ohio, Daniel Mays and Lawrence B. Hall of Youngstown, Ohio, Nyeameamkye S. Hall of Kingston, N.Y., 8 sisters Renee Townsend (late Charles), Virginia Pickney (Kenneth), Jennifer, Sandra, Judorah Tiller of Jersey City, N.J., Loran Moody (Mario) of East Orange, N.J., Wonderbi Bell (Larry) of Virginia Beach, V.A., Kesha Tiller of Decatur, G.A., 3 brothers Dextro Tiller of Poughkeepsie N.Y., Ray Allen and Renier Thompson of Boston, Mass., 10 grandchildren, 7 great grandchildren, 1 brother-in-law Marshall Hall, 1 sister-in-law Rosie Pierce, and a host of loving family and friends.

Mrs. Helen left this earthly realm on July 18, 2021 and gained her wings. Funeral Services will be held at 1pm on Saturday, July 31, 2021 at Burnt Hickory Baptist Church in Powder Springs with Rev. Matt Petty officiating. The family will receive... View Obituary & Service Information

The family of Helen Tiller-Hall created this Life Tributes page to make it easy to share your memories.

Send flowers to the Tiller-Hall family.