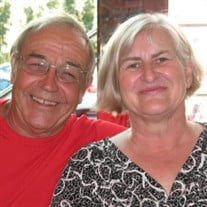 Hedwig Sieglinde Mathilda Schulte-Pruitt "Linda", age 71 of Marietta, Ga. Passed peacefully on January 15,2022. The family will have a graveside service, at Kennesaw Memorial, 1306 Whitlock Avenue, Marietta, Ga, 30064 at 11:00 a.m. Wednesday, January 19, 2022. Hedwig or "Linda" as everyone knew her was born, July 2, 1950, in Fulda, Germany . She is preceded in death by her Mother Irene, and Father Anton Schulte and daughter Maggie Jane Pruitt. Linda came to The United States in November of 1971. She was known for her kind heart, Unconditional love for her family and friends, her passion for her German heritage, ability to speak multiple languages and her outspoken, no holds bar attitude. In 1983, she moved to Atlanta from Dallas, Texas, to further her career with Xerox. In 2001 she met the man who made her life dreams come true, Jack Smith. In 2002 she pursued her love for Real Estate. Where she made an enormous impact on even more peoples lives. But, her most proud achievement were her Children and grandchildren. Watching them grow was truly her proudest moment in life. She adored all six of them, with passion and love. Her favorite title ever bestowed upon her was Oma. She is survived and missed by her life Partner, Jack Smith, her brothers Rainer and Roland Schulte of Fulda, Germany. Her sister Susanna Schulte- Baier of Fulda, Germany. Her son Patrick Schulte of Kennesaw, Ga, daughter Kandie Pruitt-Romano of Kennesaw, Ga. Her beloved Grandsons Alexander Pruitt-Redwine (28) (whom she named) Davis Schulte(24), Jesse Pruitt- Black (22),Tyler Schulte (17), Everett Romano (6) , and her one and only precious Granddaughter Sydney Schulte (21). Her sister in law Ethel Pruitt of Dallas, Texas. And many cousins, nieces, nephews, cousins and friends. Online guest book at www.westcobbfuneralhome.com.

The family of Hedwig Sieglinde Pruitt "Linda" created this Life Tributes page to make it easy to share your memories.

Send flowers to the Pruitt family.