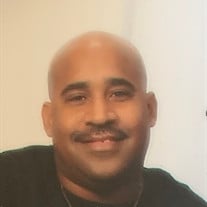 Harvey Eugene Trent was born on July 13, 1965 in Stamford, Connecticut. He was the third of four children born to Regina Mae Ragsdale. Harvey loved the Lord Jesus Christ and was a member of Bethany Community Church in Riverside, California. After moving to Powder Springs, Georgia in 2019, he united with Linked Up Church under Pastors Joel and Patricia Gregory. Harvey graduated from Arlington High School and continued his studies at Shasta College in Redding, California. He was co-owner of a Mexican Restaurant where he created his famous “Harvey Salad.” Later in life, he was employed as a security officer at the University of California, Riverside. Harvey was joined in Holy Matrimony to Ana Lilia Avila who preceded Harvey in death seven years earlier. Harvey has a beloved son, Justin Trent, from a prior marriage to Kelly Pettyjohn. He was also a devoted father to his three stepchildren Cherice Carter, Wyatt Alexander and Ryan Pettyjohn. He adored his grandson, Justin Jr. and cherished every moment spent with him. In his youth, Harvey enjoyed playing competitive basketball. He also loved to talk sports. If given the opportunity he would have made a great sports commentator. He could give you the stats on every NBA player and could accurately predict the outcome of almost any game. His favorite team was the Los Angeles Lakers. He was a fan to the end, win or lose. He was also a San Francisco 49ers football fan. Sports gave him much joy. Harvey had a beautiful spirit. His presence brightened the room. He knew how to put a smile on your face. Even though he suffered many losses in his life, he never allowed his circumstances to overwhelm the joy in his heart. He was thoughtful, kind, thankful and brave. Harvey entered glory on March 6, 2021. He was preceded in death by his wife, Ana Lilia Avila; stepfather, Raymond Addison Cox; and aunt, Shirley Ragsdale. He leaves to cherish his precious memory his biological son, Justin Trent; God-given children, Cherice, Wyatt, Ryan; grandson, Justin Jr. “JJ” ; ex-wife and friend, Kelly Pettyjohn; mother, Regina Cox; sister, Regina (husband Terrence) Coleman; brothers, Curtis Trent, Kenneth Cox; nieces, Stephanie (husband Jaguar) Reed, Christina (husband Leo) Faya, Alyse Trent, Caylah Trent; nephew, Bryan Trent; great-nieces and nephews, Shalynn, Kameron, Shani, Devyn, Elijah, Nathan, Cullen, Kason; uncles, George (wife Mary) Ragsdale, Wilbert (wife Ida) Ragsdale, Alfred (wife Vera) Ragsdale, Melvin Ragsdale; and a host of cousins and friends. Graveside Services will be held at 12:30 pm on Sunday, March 14, 2021 at Kennesaw Memorial Park in Marietta. The family will receive friends on Sunday, March 14, 2021 from 10:00 am until 12:00 pm at West Cobb Funeral Home and Crematory in Marietta. Online guest book at www.westcobbfuneralhome.com.

Harvey Eugene Trent was born on July 13, 1965 in Stamford, Connecticut. He was the third of four children born to Regina Mae Ragsdale. Harvey loved the Lord Jesus Christ and was a member of Bethany Community Church in Riverside, California.... View Obituary & Service Information

The family of Harvey E Trent created this Life Tributes page to make it easy to share your memories.

Send flowers to the Trent family.