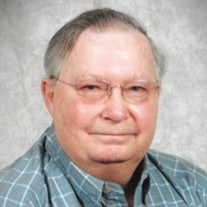 Harvey Neal Hendrix, Sr., age 82, of Marietta, Georgia went home to be with his Lord on March 20, 2021. A Funeral Service will be held at 11:30 am on Tuesday, March 23 in the chapel at West Cobb Funeral Home and Crematory in Marietta with Rev. Barry Ferguson officiating and Rev. Andy Fowler providing music. Harvey was born in Villa Rica, Georgia to Lula Mae Craig and Roy Hendrix. He was a brother to Ginny Reid, Miriam Tyson, James B. Hendrix, Herman Hendrix and Lois Blevin. In 1958, he married his high school sweetheart, Ann Bryan, and they settled in Atlanta, Georgia. After serving in the United States Army, Harvey began a career in insurance that lasted 31 years. He retired from Life of Georgia in 1994 but did not stay retired for long, as he joined the transportation staff of Presbyterian Village in Austell, Georgia. He retired a second time in 2005. Harvey was a loving and devoted husband, father, and grandfather. A member of Bethany United Methodist Church for the last 54 years, he loved his Lord and Savior. His faith carried him through good times and through tough times. His family and friends knew him as a man of few words but lots of wisdom. Those lucky enough to spend time with him enjoyed his keen sense of humor and his mischievous smile. Harvey was preceded in death by his loving wife of 60 years, Ann Bryan Hendrix, and by his parents and two of his five siblings. Survivors include: sons Harvey Neal Hendrix, Jr. and David Bryan Hendrix (Nan); five grandchildren, Brent, Clara, Emily, MyraAnn, and Destin; eight great grandchildren, Matthew, Katie, Christian, Abigail, Benjamin, Mason, and twins Amelia and Elizabeth; sisters, Ginny and Miriam, and brother J.B. The family will receive friends from 10:00 to 11:00 am on Tuesday, March 23, 2021 at West Cobb Funeral Home. Visitation will be followed by the 11:30 am Service with limited seating and masks/social distancing required. In lieu of flowers, memorial contributions may be made to the Bethany United Methodist Church Building Fund (760 Hurt Road, Smyrna, GA 30082) or to the Mountain Top Boys Home (65 Mountain Top Way, Sugar Valley, GA 30746).

Harvey Neal Hendrix, Sr., age 82, of Marietta, Georgia went home to be with his Lord on March 20, 2021. A Funeral Service will be held at 11:30 am on Tuesday, March 23 in the chapel at West Cobb Funeral Home and Crematory in Marietta with Rev.... View Obituary & Service Information

The family of Harvey Hendrix created this Life Tributes page to make it easy to share your memories.

Send flowers to the Hendrix family.