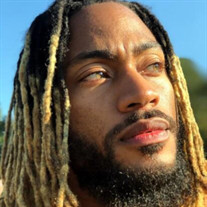 Gregory Jemelle (Melle) Harris was born and raised in Macon, Georgia, on February 27th, 1991. He was the youngest of four siblings, including a twin brother. Melle’s family and extended family all lived around the same area, and he had a very close relationship with his cousins who were more like brothers and sisters; and aunts and uncles who were more like extended parents and grandparents. Melle grew up with a deep love for God, his church, Swift Creek Baptist Church, and his community. He graduated from Northeast High School in Macon, where he excelled in marching band, track, and golf, and received his letterman’s jacket. Melle then went on to college and graduated with an Associate’s degree in Criminal Justice. Melle was multi-talented with many skills. He had a dreamer’s heart and the drive to match. His beautiful smile and kind, genuine heart captured everyone he encountered. His ambition led him to move to Dallas, Georgia for a new career in February of 2020. Unbeknownst to him, this move would lead him to find his future wife, Sydney Pigram, and step-son Jacob, with whom he proudly and happily shared his life and dreams to the fulfillment of his destiny here on earth. Melle met Sydney on June 11th, 2020. Their friendship and shared foundational beliefs in their Lord and Savior, Jesus Christ, quickly propelled their relationship into love. Melle began regularly attending International Gospel Outreach Church in Smyrna, Georgia, with Sydney and Jacob, and it became his home church. He believed God had planted him there for a purpose. He made new friends and became part of a church family who loved him dearly, going on to serve with Sydney as a Greeter. On October 18th, 2020, Melle presented Sydney with a beautiful Promise Ring to symbolize his love for her and his promise that he would one day marry her. Melle and Sydney sought the Lord through prayer concerning the desires of their hearts to be married, and in January 2021, they began pre-marital counseling classes. They were both so excited, and they were determined to prepare as best they could to have a successful marriage. By June, Melle went to Iowa for training, where he fulfilled his dream of graduating from Trucking School and obtaining his Commercial Driver’s License. Melle went on to travel throughout the United States, even driving through the mountains of Northern California. Melle transitioned to local driving and completed his pre-marital courses with Sydney. With encouragement from their Pastor and parents, they decided to wed in an intimate ceremony with immediate family present. On October 15th, 2021, Melle proposed to Sydney with just the two of them present. He told her that he would fulfill his promise to her if she would be his wife. They were wed on November 6th, 2021. Their marital bliss lasted seven beautiful months until Melle was called home on June 13th, 2022, almost two years from the date of their initial meeting. Gregory Jemelle Harris is survived by his beloved wife, Sydney Harris; his step-son, Jacob Merritt; his mother, Linda Harris; his father, Charles Harris; his father-in-law and mother-in-law, Vinson and Kimberly Pigram; his sister, Charlyn Allen (Akira); his sister, Chandra Harris; and his twin brother, Marvelle Harris; his sister-in-law and brother-in-law, Maggi and George Ishadimu. He is also survived by many aunts, uncles, cousins, nieces, nephews, and friends who loved him dearly. Melle will be truly missed by all. His memory will be cherished forever. We love you, Melle!

Gregory Jemelle (Melle) Harris was born and raised in Macon, Georgia, on February 27th, 1991. He was the youngest of four siblings, including a twin brother. Melle&#8217;s family and extended family all lived around the same area, and he had... View Obituary & Service Information

The family of Gregory Jemelle Harris created this Life Tributes page to make it easy to share your memories.

Gregory Jemelle (Melle) Harris was born and raised in Macon,...

Send flowers to the Harris family.