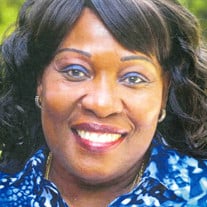 Geraldine E. Moffatt, age 69, of Kennesaw, Georgia passed away December 24, 2021. Funeral Service will be held at 11:00 am on Friday, January 14, 2022 at West Cobb Funeral Home and Crematory Chapel in Marietta, GA. Interment will follow at Kennesaw Memorial Park in Marietta, Georgia. Geraldine E. Clarke, aka Joy, a native of Jamaica, West Indies, was born May 5, 1952 to Beaton Clarke and Rosenda Anderson Clarke in the Parish of Kingston at Victoria Jubilee Hospital. She was the first born and only girl among five children. Geraldine began her education by attending Aloysius Primary School in Kingston. When her parents desired to improve their way of life, they migrated to the United States, leaving their children to reside temporarily in St. Thomas, Jamaica to live with their grandmother, Marion Clarke. While there, she attended the White Horse Primary School and assisted her grandmother in raising her siblings before they joined their parents in the United States in 1971.After migrating to the United States, Geraldine lived in Hollis, New York. There she sought to obtain a profession in accounting by attending a vocational school. She used that training to fulfill her duties working with Executone Inc. Additionally, in New York, she was blessed to meet her husband to be, Delroy Moffatt. Geraldine eventually married her life partner on June 23, 1979. After the wedding, she and Delroy moved to California. From that point, the sky became their limit and together they “conquered the hazards of the climb” as the Good Lord blessed them tremendously in their marriage of 42 years. Both resided in California for 23 years and during that time, they were blessed with their son Jeffrey. Geraldine worked for Akzo Nobel for those 23 years, before moving back to the East Coast in February 2002 to reside with her family in Kennesaw, Georgia. There, Geraldine secured a position with GDS Associates, Inc. where she remained for approximately 19 years until the day of her passing. Geraldine leaves to cherish her memory, her beloved husband, Delroy and her son, Jeffrey. She also leaves behind three brothers, Alford aka Bunny (wife Debbie), Franklin aka Frankie, and Clive. Moreover, she leaves behind her mother-in-law (Lucille Moffatt), sister-in-law(s), Marion Wright (husband William) and Cheryll Craigie, and brother-in-law Corey Moffatt. Additionally, she leaves behind many nieces and nephews all around the United States and Canada, her Christian family and friends. The family will receive friends on Thursday, January 13, 2022 from 4:00 pm until 7:00 pm at West Cobb Funeral Home and Crematory in Marietta, GA. Online guest book at www.westcobbfuneralhome.com.

Geraldine E. Moffatt, age 69, of Kennesaw, Georgia passed away December 24, 2021. Funeral Service will be held at 11:00 am on Friday, January 14, 2022 at West Cobb Funeral Home and Crematory Chapel in Marietta, GA. Interment will follow at Kennesaw... View Obituary & Service Information

The family of Geraldine E. Moffatt created this Life Tributes page to make it easy to share your memories.

Send flowers to the Moffatt family.