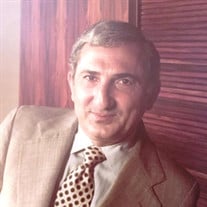 George Louis DeBenedetto, 92, devoted husband and loving father, a native of Brusly, LA, passed away peacefully on Friday, September 3, 2021 at Sterling Estates West Cobb, Marietta, GA. Funeral Mass will be held at 10:00 am on Thursday, September 9, 2021 at St. Joseph Catholic Church in Marietta, GA. A second service will be held at Greenoaks Funeral Home in Baton Rouge, LA on Tuesday, September 14, 2021 at 10:00 am with entombment to follow at Greenoaks Memorial Park mausoleum with military honors. He was preceded in death by his parents, Rocco DeBenedetto Sr. and Camella Corrente DeBenedetto; eight brothers, Frank, Charlie, Russell, Nick, Pete, Joe, Rocco Jr. and Anthony; and two sisters, Anne and Mary. George served in the Korean War from April 1952 - February 1953. He attended Tulane University in New Orleans prior to be hired by Lanier Business Products. He worked for Lanier Business Products for 28 years and retired as executive vice president of marketing and international operations. Following retirement, George helped establish Omni Business Products in Atlanta in 1988 until his second retirement. On September 14, 1986, George, along with two other couples, founded La Societá Italiana, Inc. and was the first president. George was an avid gardener, vintner and took pleasure in helping others. George was loved and respected by family and many friends and business associates. George is survived by his wife Marge DeBenedetto of Marietta, GA, son Terry Schubach, sister Catherine Spitale of Zachary, La., and many nieces and nephews. The family will receive friends after mass on Thursday, September 9, 2021 from 12:30 pm until 3:00 pm at West Cobb Funeral Home and Crematory in Marietta, GA. In lieu of flowers, donations can be made to "Our Lady of Perpetual Help Cancer Home", 760 Pollard Boulevard, SW, Atlanta, Georgia 30315. Online guest book at www.westcobbfuneralhome.com.

The family of George Louis Debenedetto created this Life Tributes page to make it easy to share your memories.

Send flowers to the DeBenedetto family.