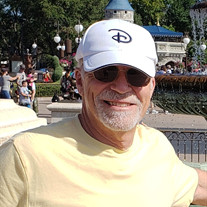 George Clifford Blake Jr. was born on August 3, 1944 in London Ontario, Canada. He passed peacefully at home on August 6, 2021. A Memorial Service will be held at 2:00pm on Saturday, August 14, 2021 at St. Teresa's Episcopal Church in Acworth, GA. The family will receive visitors on Friday, August 13, 2021 from 1:00 PM- 3:00 PM at West Cobb Funeral Home. George was raised in Camarillo, California, where he graduated from Adolfo Camarillo High School in 1962. After graduation, he joined the US Air Force where he served for four years. George's next step was to follow his dream of becoming an architect. He attended the Georgia Institute of Technology for two years and finished his degree at Southern Polytechnic State University in 1975. He worked as an architect for the Cobb County Board of Education, and then at Haley and Howard Architects. During this time; he also served in the Georgia Air National Guard. George decided to go full time with the Air National Guard and became a Maintenance Officer with the 116th Squadron at Dobbins Air Force Base, where he served 32 years. Lt. Colonel Blake retired on December 31, 1999. After failing retirement, George went to work as a Construction Manager for the City of Atlanta until 2014, when he finally retired. He is preceded in death by his parents, George Clifford Blake Sr. and Edith Marshall and his daughter Allison Renee Blake. He is survived by his wife of 54 years (655 months), Rositha Blake; daughter Michelle (Tim) Behan of Spring Hill, TN; grandchildren Connor and Claire Behan; several nieces and nephews; and so many friends that count as family. George was a very active member of St. Teresa's Episcopal Church in Acworth, GA, where he served as Chair of Building and Grounds, usher, vestry member, and other volunteer positions. He was actively involved with Special Needs Cobb, where he formerly served as Board President, and he volunteered at the Southern Museum in Kennesaw, GA. George's passions were many, including anything related to Disney, history, and architecture. He also kept a close follow on his teams; the Braves, Falcons, and Yellow Jackets. George was also passionate in being optimistic and caring for others. Any restaurant server who ever waited on him can attest to this with the gift they received from him; a specially designed George Blake straw paper star. But his biggest passions were for his family and for his country. He loved both deeply and fiercely. In lieu of flowers, the family requests donations to SpecialNeedsCobb.org. Online guest book at www.westcobbfuneralhome.com.

George Clifford Blake Jr. was born on August 3, 1944 in London Ontario, Canada. He passed peacefully at home on August 6, 2021. A Memorial Service will be held at 2:00pm on Saturday, August 14, 2021 at St. Teresa's Episcopal Church in Acworth,... View Obituary & Service Information

The family of George Clifford Blake Jr. created this Life Tributes page to make it easy to share your memories.

Send flowers to the Blake family.