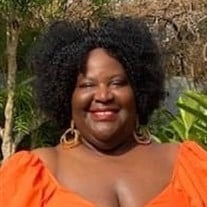 Sunrise: September 25, 1963 - Sunset: January 18, 2022 He will wipe away every tear from their eyes, and death shall be no more, neither shall there be mourning, nor crying, nor pain anymore, for the former things have passed away." Revelation 21:4 It is with profound despair that the Farngalo, Mason, and Gatei families announce the untimely home-going of their daughter, aunty, sister, niece, cousin, and mother, Gail Greezakwah Farngalo. Gail was called from labor to rest in her 58th year, on Tuesday, January 18, 2022, at the Northwell Long Island Jewish Hospital, Forest Hills, Queens, New York, USA. Gail was born in Sanniquellie, Nimba County, to the union of Ambassador Gabriel Gbloh Farngalo and Emma Konah Mason; both of whom predeceased her. She was also predeceased by three brothers. Gail's career as a dedicated public servant and an exceptional Liberian diplomat began 2010, when employed by the Government of Liberia and assigned at the Liberian Permanent Mission to the United Nations. She rose to the rank of Minister Counselor, and covered, on behalf of the Liberian Mission, the Third Committee (Social Humanitarian and Cultural Affairs) of the United Nations General Assembly. In this capacity, Gail also served as Election Officer and Liaison for the Military, Police and Corrections Affairs - showcasing Liberia's peacekeeping efforts in United Nations Peacekeeping Missions. While covering health issues in the Liberian Mission, Gail was charged with coordinating the Mission's engagements during the Ebola epidemic, and was an active participant in the United Nations preliminary response coordination meetings; and meetings of the Ebola Multi-partner Trust Fund. Gail also followed and attended successive meetings of the Secretary-General Ban Ki-Moon's High-Level Panel on the strengthening of Healthcare Systems, in the wake of the Ebola Health Crisis. While serving the Permanent Mission of Liberia to the United Nations with distinction, Gail was deservingly seconded to the Office of the President of the 75th United Nations General Assembly for a one-year period commencing September 2020; and handled Gender Equality and Women Empowerment matters. Following her brilliant performance, Gail was again seconded for another year, this time, in the Office of the President of the 76th United Nations General Assembly which began September 2021; in the capacity of Senior Adviser / Team Lead Human Rights; a post she held until her passing. Gail's service in the area of human rights, gender equality, and women's empowerment is very well acknowledged and deeply appreciated across the United Nations System. We will miss her so dearly. She leaves to mourn her son Mahdi Gatei, several siblings, and a host of relatives and friends. Funeral Services will be held in Atlanta, Georgia; please see details below: Vigil/Wake Keeping: Date & Time: February 18, 2022; 6:00 P.M. - 9:00 P.M. Venue: West Cobb Funeral Home & Crematory 2480 Macland Rd SW Marietta, GA 30064 Funeral Rites: Date & Time: February 19, 2022; 12:00 Noon Venue: Holy Family Catholic 3401 Lower Roswell Rd Marietta GA 30068 Internment Follows at the Kennesaw Memorial Park 1306 Whitlock Ave NW Marietta GA 30064

Sunrise: September 25, 1963 - Sunset: January 18, 2022 He will wipe away every tear from their eyes, and death shall be no more, neither shall there be mourning, nor crying, nor pain anymore, for the former things have passed away." Revelation... View Obituary & Service Information

The family of Gail Farngalo created this Life Tributes page to make it easy to share your memories.

Send flowers to the Farngalo family.