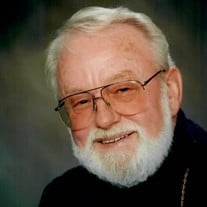 Fred Wyatt Chambers passed away peacefully nine months ago on July 18, 2020 at age 84. Strong and resilient, with a good sense of humor, Fred fought valiantly through a number of near death experiences, suffering from numerous conditions. His family often joked that he was a man gifted with 9 lives. Fred was born in Clayton GA of Rabun Co. in 1936, but grew up in Atlanta. He graduated from West Fulton High School, where he was active in basketball and baseball. He met his wife Mary there, when she asked him to the Sadie Hawkins Valentine Dance-their first date. Shortly after their marriage Fred began an apprenticeship to become a licensed electrician. He was a member of I.B.E.W. Local 613 for the remainder of his life. After retiring, Fred continued to teach his skills to new students for several years. Fred and Mary moved their family to Lithia Springs in 1963 and raised their five children in a bustling household, the neighborhood gathering spot. He was a beloved husband, father and grandfather. His favorite hobbies included hunting, custom gun stock carving and refinishing, and fishing-especially deep sea trips. From time to time he liked to play guitar; his favorite musician was Chet Atkins. He lost his devoted wife Mary in 1996 after 39 years of marriage and never remarried. He was also predeceased by his eldest son Bart in 2017 at age 57, and his parents William and Kitty Chambers. He is survived by four children: Dena Lawson of Powder Springs, Dean Chambers of Marietta, Curt Chambers of Baldwin, Kitty Revelle of Villa Rica, and two grandchildren, Christina Revelle and Kaeli Chambers. Fred had three siblings: Lloyd Chambers, Cheryl Moser and Alan Chambers (recently deceased). As Fred had always requested, his ashes were spread together with his wife's in a lovely, wooded, creek-side setting-an intimate occasion shared with a group of close family members. Because of issues regarding Covid-19, it was decided to not have a formal memorial service, thus the delay of his obituary notice. For anyone interested in helping to preserve our beautiful natural lands, please feel free to make a donation in Fred or Mary's honor to the Bartram Trail Society. Mary had voluntarily served as secretary to the Bartram Trail Society for years before she passed. The family would like to thank the staff of Grace Living Personal Care Home and Amity Hospice for their loving care during the last years of Fred's life.

Fred Wyatt Chambers passed away peacefully nine months ago on July 18, 2020 at age 84. Strong and resilient, with a good sense of humor, Fred fought valiantly through a number of near death experiences, suffering from numerous conditions.... View Obituary & Service Information

The family of Fred Wyatt Chambers created this Life Tributes page to make it easy to share your memories.

Fred Wyatt Chambers passed away peacefully nine months ago on...

Send flowers to the Chambers family.