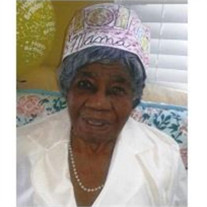 Etheline Briscoe was born on June 30th, 1918 in the sunny isle of Jamaica, W.I. She was born in the Lampard District of Frankfield, in the parish of Clarendon. Our beloved queen Etheline, departed this life on Wednesday August 12th, 2020, at the age of 102 years young. She lived a long and fruitful life and will be sorely missed. Her parents were the late John and Mary Ann Wright, and she was the fourth of six siblings. In1987 Etheline migrated from Jamaica to the United States to join her daughters. Etheline was educated at the Frankfield Elementary School up to the sixth grade. At school she loved to participate in drama and was often identified in the community as the“Drama Queen girl”. In addition to drama, Etheline loved music. She mastered the organ and played into her late teens. She placed a high value on education and made enormous sacrifices to ensure that all her daughters received the best possible education. She also taught her daughters how to be good citizens, beautiful women, and to be respectful of others. She loved her five daughters and was very protective of them. Etheline worked as a Ward Assistant at the May Pen Infirmary for many years, and she retired in 1980. She was a beloved employee, a hard and conscientious worker and her patients loved her. It is no wonder she won the hearts of many people. She was affectionately called Mama, Ms. Ettie, Lady Bris, Nurse Briscoe and Sister Briscoe by family, friends and her church family. Etheline loved God, her church, and was a praying Mother. Etheline was a fun-loving, humble, humorous and a jovial person. She loved making jokes, eating Jamaican food, making her special pea soup, various refreshing drinks, crocheting, and visiting with family and friends. Her greatest pleasures in life, was spending time with her daughters and grandchildren, reminiscing about the past and reading her bible every day. So many people have shared how thoughtful and kind she was and that she will be dearly missed. Etheline was the tie that bound our family together. Etheline is predeceased by her husband Eral Briscoe. She has left to cherish her loving memories: Five daughters, Ms Cochita Skervin, Mrs. Yvonne Mumby (Paul son-in-law), Mrs. Sonia Miller (Mark son-in-law), Mrs. Norma Beckford (Frank son-in-law) and Mrs. Claudette Hall (Peter son-in-law); six grandchildren, Andre Miller, Monique Palmer, Tristan Hall, Aaron Hall, Kamar Beckford and Ryan Mumby; 4 great-grandchildren; Ida Shelton sister-in-law. Etheline was also loved by many friends, nieces, nephews, cousins, church members and supportive family friends in the United States, England and Jamaica. May her beloved soul rest in peace.

Etheline Briscoe was born on June 30th, 1918 in the sunny isle of Jamaica, W.I. She was born in the Lampard District of Frankfield, in the parish of Clarendon. Our beloved queen Etheline, departed this life on Wednesday August 12th, 2020, at... View Obituary & Service Information

The family of Etheline Briscoe created this Life Tributes page to make it easy to share your memories.

Send flowers to the Briscoe family.