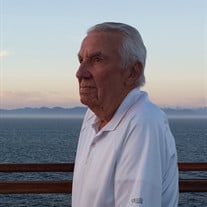 Ernest Thomas Craig II passed away on Monday, May 18, 2020 in Atlanta, Georgia. He was soon to turn 95 years old, a milestone of which he was very proud. He is celebrated as a wonderful and loving father, grandfather, great-grandfather, friend and patriot. Ernest, who preferred to be known as "Ernie", was born on July 26, 1925 in Philadelphia. He was conscripted into the army as a Private on Aug 31, 1943 with the occupation of "high school" listed on his induction papers. Due to urgent military requirements his training was abbreviated, and he was dispatched to fight overseas before reaching the previously required age of 19. He was stationed in North Africa and Italy where he fought several major battles. On June 16, 1944 at only 18 years of age he was critically wounded during a battle in Italy. He spent more than a year in hospitals and rehabilitation overseas and in the US. For this Ernie was decorated with the Purple Heart. He was honorably discharged in Aug 1945. Upon completion of his rehabilitation Ernie used his accumulated service pay to purchase a yellow convertible car with red leather seats. He kept a picture of this car by his bedside. Ernie graduated from Ursinus College around 1950 with a Bachelor of Arts degree. He then embarked on his career as a salesman, sales manager, Executive Sales Manager and General Manager at Sun Chemical Corporation in the General Printing Ink division. Ernie met Barbara Evelyn Harle at the LuLu Temple Country Club in Philadelphia and they were married on June 2, 1956. They settled in Langhorne, PA in the Neshaminy Woods neighborhood. Ernie enjoyed woodworking, building stone walls, gardening, and caring for his magnificent dogwood trees and azaleas. The family purchased a second home in Sea Isle City, NJ where they spent their summers. Ernie served as Commodore of the Yacht Club of Sea Isle City in 1975. He directed a major redesign of the clubhouse and enjoyed sailing with his children. In later years, Ernie and Barbara retired and moved to Pelican Preserve in Fort Myers, FL where they enjoyed golfing, traveling and friends. Ernie is preceded in death by his wife Barbara, his daughter Barbara Lin (John) Janda and his son Tim (Jacqueline). Ernie is survived by his son E. Thomas (Gina) Craig, his sister Phyllis Craig Steinberg, his son-in-law John Joseph Janda, his daughter-in-law Jacqueline Craig, four grandchildren: Jennifer (John) Trafton, Chris Trapper, Elizabeth (Chris) Davis, Timothy Craig, Mallory Craig and Alex Craig; and four great-grandchildren: Kendall, Riley, Hagan and Roxie. Ernie will always be remembered as a man who loved his family, was generous in spirit and brought a smile to those around him. Services are pending the removal of Covid-19 related restrictions. In lieu of flowers, those wishing to honor Ernie's life may make a donation to the St. Jude Children's Research Hospital.

Ernest Thomas Craig II passed away on Monday, May 18, 2020 in Atlanta, Georgia. He was soon to turn 95 years old, a milestone of which he was very proud. He is celebrated as a wonderful and loving father, grandfather, great-grandfather, friend... View Obituary & Service Information

The family of Ernest Craig created this Life Tributes page to make it easy to share your memories.

Send flowers to the Craig family.