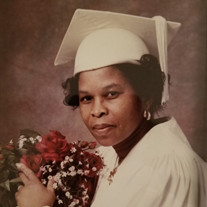 Claretta Myra Gumbs-Smith (Elmira) a beloved mother, grandmother, sister, aunt, cousin and friend, went home to be with her Lord and Savior on April 16, 2020. Elmira was born in Saint John, Antigua on October 23, 1935 to Samuel Gomes and Gertrude Ne? George-Gomes. As a little girl, she migrated with her family to Grays Farm, Antigua. There she was raised and obtained her education. As a young lady, she migrated to St. Thomas U.S.V.I., where she married and began a family; having three children. In the early 1970s, Elmira migrated to New York and later settled in Asbury Park New Jersey; with her three children. Her love for learning led her to pursue a high school diploma from Asbury Park high school. Following this, Elmira continued her education by obtaining a license in cosmetology from Smith's Institute of Technology. She worked as a stylist and teacher along side the owner, Beverly Smith, at Smith's Institute of Technology until her love of medicine led her back to school in pursuit of a Nursing degree. After several years of study, Elmira obtained a Bachelors of Science degree, becoming a nurse. She worked as a nurse until she retired in 2001. Although Elmira was a dedicated professional, she invested quality time with God, her children, her church and friends. She was an active member in her home church, Saint Peter's Claver, of Asbury Park, N.J. and stretched her love further by mentoring and fostering local youths. She enjoyed cooking island cuisines for her family and friends, crocheting and knitting blankets, shawls and scarfs to give out to the seniors in her community, sewing and gardening. Elmira is survived by her two daughters: Sandra Daniely (Kevin), and Annie McKelly and by her son: Edward Smith (Lisa) and Seven (7) grand-children: 1. Ronald McKelly 2. Everett Smith 3. David McKelly 4. Bryan Smith 5. Danielle McKelly 6. Jassamine Green 7. Emanuel Smith Sisters: Kerlita Gomes and Gloria Gordon and one brother, Maurice Gomes. A Private Graveside Service will be held on Saturday, April 25, 2020 at Cheatham Hill Memorial Park. (Please keep the family in your prayers and thoughts during this difficult time.)

Claretta Myra Gumbs-Smith (Elmira) a beloved mother, grandmother, sister, aunt, cousin and friend, went home to be with her Lord and Savior on April 16, 2020. Elmira was born in Saint John, Antigua on October 23, 1935 to Samuel Gomes and Gertrude... View Obituary & Service Information

The family of Elmira C. Smith created this Life Tributes page to make it easy to share your memories.

Send flowers to the Smith family.