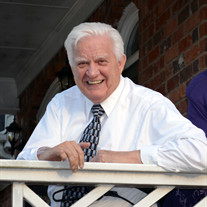 Elmer LeRoy (Roy) Krogh, age 91, beloved husband, father, grandfather, brother, uncle, and friend passed away peacefully at his home in Powder Springs, GA on January 14th, 2021. He is survived by his wife of 56 years, Ellen Andersen Krogh, his brother Ron Krogh and 11 children: Robin (and Sam) Davis, Kevin (and Nancy) Krogh, Kari (and Dan) Glahn, Steve (and Debbie) Krogh, Kathryn Olsen, Kyle Krogh, Kristin (and Chris) Drysdale, Rick (and Wendi) Krogh, Randy (and Carrie) Krogh, Lauri (and Kinley) Shell, Robert (and Sharon) Krogh; 52 grandchildren and 69 great grandchildren. Roy was born in Salt Lake City, UT on March 26, 1929 to Charles Elmer Krogh and Mary Thompson. He was the oldest of 5 children. He grew up swimming in the Salt Lake canals and loved the challenge of swimming against the current. This made him physically strong. When he was 16, he entered the Marine Corp and served in Hawaii and China. After returning home, Roy completed his GED and began attending Utah State University where he became the Intermountain Swimming Champion. He married Patsy Hyt and had 4 children (Robin, Kevin, Kari and Steve) before Pat unexpectedly passed in 1955. While attending Utah State, he enrolled in ROTC, received an army commission and served in Korea and Japan. He attained the rank of 1st Lieutenant. On his trip home from Japan, he contracted polio which paralyzed the right side of his body. His recovery was arduous but he persevered. He eventually received his Masters Degree from Utah State, was married for a time to Karen Hansen and had 3 children (Kathryn, Kyle and Kristin). Roy met his wife Ellen Andersen at a choir rehearsal and together they had 4 children (Rick, Randy Lauri and Robert). Roy spent his life in education as teacher and principal in various schools in Utah and Idaho and eventually ended up in Georgia where he continued his career. As a principal, he learned the names of all the kids in the school. His students loved him and would work hard to excel because they knew Mr. Krogh loved them. He was always planning special events and thoroughly enjoyed bringing music into the schools. Roy sang frequently with his beautiful tenor voice and produced numerous musicals from Brigandoon to Oklahoma. He taught his children a love of country, the importance of education and singing in the home. He truly left a legacy as many of his children, grandchildren and great grandchildren have accomplished much in education, music and military service. Roy was a faithful member of The Church of Jesus Christ of Latter Day Saints and endured well to the end. A Viewing and Funeral services will be held at the LDS church building (2595 New MacLand Rd, Powder Springs, GA 30127). Viewing: January 26, 2021 from 5:00 to 7:00 pm. Funeral Services: January 27, 2021 at 11:30 am.

The family of Elmer LeRoy Krogh created this Life Tributes page to make it easy to share your memories.

Send flowers to the Krogh family.