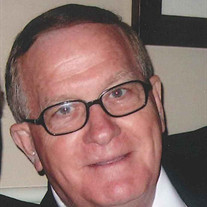 Elmer D. (Hutch) Hutchinson, 79, of Marietta passed away on February 12, 2020 after a long battle with dementia. Hutch was born on September 16, 1940 and grew up in Stoutsville and Circleville, Ohio. He graduated from Stoutsville High School in 1958 where he was an exceptional athlete and voted best looking of his senior class. After high school, Hutch joined the United States Navy in 1958 as a seaman recruit and served during the Vietnam War. During his time in the Navy, he served in Japan, Iceland, and Australia. He spent seven years stationed aboard ships and was a member of The Great 58 Mobile Construction Battalion. A highlight of his naval travels is his attendance at the 1964 Summer Olympics in Tokyo, Japan. He very much enjoyed seeing the world while serving in the Navy. Hutch retired from the United States Navy in 1978 as a chief storekeeper after 20 years of serving his country. Upon retirement from the United States Navy, he moved to Marietta, Georgia in 1978 to work for Tri-State Hospital Supply and retired in 2000. He was a father that never stopped giving, he worked at Sam's Wholesale in the evenings and on the weekends to send his children to college. After retirement was a little non-eventful, he decided to go back to work for WellStar Medical Group in their distribution center where he retired after several years of employment. Elmer is preceded in death by his wife of 52 years, Ruth Elaine (Reynolds) Hutchinson and eight of ten brothers and sisters. He is survived by his children, Scott (Schelli) Hutchinson (Marietta, GA), Teresa (John) Brady (Acworth, GA), His grandchildren, Dylan (Catherine) Steed, Megan Steed, (Fiance' Adam Lowe) Ashlyn Hutchinson, Abbey Hutchinson, William Hutchinson, Michael Brady, and Caitlyn Wagner (Jake), along with a great grandson Henry Steed and a great granddaughter Bailee Wagner. He is survived by two brothers Marshall Hutchinson and Donnie Hutchinson, both of Ohio, and a brother-in-law, James Reynolds (Fran) of Ohio. He is also survived by many loving nephews and nieces. Additionally, he is survived by his daughter Marcy Happeney, (Randy) (Lancaster, Ohio) and grandchildren Lauren Sorey (Clayton), Mitchell Happeney, Clayton Happeney and great grandsons Wade and Walker Sorey. Funeral services will be held at West Cobb Funeral Home, 2480 Macland Road, Marietta, Georgia 30064 on February 21, 2020. Visitation will be from 12pm to 2pm with the funeral service following at 2pm. Interment will follow the funeral at Kennesaw Memorial Cemetery at 1306 Whitlock Ave. NW, Marietta, Ga 30064.

Elmer D. (Hutch) Hutchinson, 79, of Marietta passed away on February 12, 2020 after a long battle with dementia. Hutch was born on September 16, 1940 and grew up in Stoutsville and Circleville, Ohio. He graduated from Stoutsville High School... View Obituary & Service Information

The family of Elmer D. Hutchinson created this Life Tributes page to make it easy to share your memories.

Elmer D. (Hutch) Hutchinson, 79, of Marietta passed away on February...

Send flowers to the Hutchinson family.