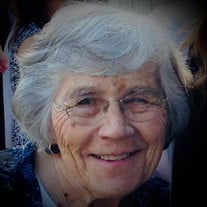 Elizabeth "Betty" Zauner, 93, of Marietta, GA passed away on Monday, March 1, 2021. She was in her daughter's home with two of her daughters by her side. Born May 3, 1927, in The Bronx, NY, Betty was the daughter of Frank and Elizabeth Schmidt. She had one sister, Margaret Uhl. Betty attended Central Commercial High School and worked for Bell Laboratories after graduation. She married Nicholas K. Zauner on October 23, 1948, and they celebrated 43 years of marriage until his passing on April 6, 1992. Betty and Nick began their journey of raising their 5 children in The Bronx where the family was a member of Our Lady of the Assumption Catholic Church. Betty volunteered both at the church and at Our Lady of the Assumption School where the children attended. She was also a dedicated Girl Scout Leader. In 1968 Nick and Betty moved to Sylvania, Ohio for Nick's job. In Sylvania, she attended St. Joseph's Catholic Church and continued her active leadership role in Girl Scouts. She developed her love for gardening in Ohio and was a long-time volunteer for the Toledo Botanical Gardens. Besides gardening, Betty was always taking classes and acquiring new skills which included quilting, crocheting, needlepoint, cross-stitch, and basket weaving. Betty and Nick raised their children to be independent, encouraging them to embark on their journeys resulting in all five children living in different parts of the country (Massachusetts, Texas, Georgia, Virginia, Louisiana.). After her husband passed away in 1992, Betty established her home in Marietta, Georgia to be near family. There she continued her passion for gardening and even began taking yoga classes. Many of her hand-made quilts and crocheted baby blankets were given to grandchildren and great-grandchildren but many were donated to the St. Joseph Layette Program where she attended church. Betty was able to remain in her own home until the last week of her life. She told her children "Do not grieve long (if at all!) as life goes on very quickly without me." Betty was predeceased by her husband, Nicholas, in 1992, her father, Frank Schmidt in 1985, her sister Margaret Uhl in 1991, her mother, Elizabeth Schmidt in 1992, and her son, John in 2013. She is survived by her son, Paul Zauner (Susan), daughters, Anne Underwood (Gary), Eileen Hilburn (Ben), Mary Delesdernier (Michael), daughter-in-law, Sherry Zauner, 23 grandchildren, 26 great-grandchildren and devoted niece, Ellen Uhl. Services will be a funeral mass at Our Lady of the Assumption Catholic Church, 1634 Mahan Ave, The Bronx, NY 10461 on Friday, Mar 12, 2021, at 11:00 AM. Following the mass, Betty will be interred at St Raymond's Cemetery in the Bronx with her husband, her parents, her sister, and brother-in-law. The family requests that in lieu of flowers, donations may be made to Family Promise of Cobb County in memory of Betty Zauner.

Elizabeth "Betty" Zauner, 93, of Marietta, GA passed away on Monday, March 1, 2021. She was in her daughter's home with two of her daughters by her side. Born May 3, 1927, in The Bronx, NY, Betty was the daughter of Frank and Elizabeth Schmidt.... View Obituary & Service Information

The family of Elizabeth "Betty" Zauner created this Life Tributes page to make it easy to share your memories.

Elizabeth &quot;Betty&quot; Zauner, 93, of Marietta, GA passed away on...

Send flowers to the Zauner family.