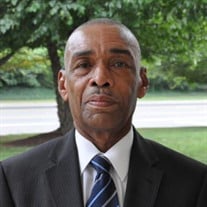 Edward Leo Marshall, age 80, of Dallas, Georgia passed away March 28, 2021. Graveside Service will be held at 2:00 pm on Sunday, April 11, 2021 at Cheatham Hill Memorial Park in Marietta, GA. Interment will follow at Cheatham Hill Memorial Park in Marietta, Georgia. Edward Leo Marshall, age 80, of Dallas Georgia passed away March 28, 2021 at his home. Edward was born on May 21, 1940 to the union of Gertrude & Winston Marshall in Bridgetown, Barbados. He migrated to New York where he lived for many years after which he migrated to Georgia with his family where he resides until he passed away. Edward grew up and served in the Anglican church until he met his wife Dawnell in 1997, married shortly after and joined her in the 7th Day Church of God in Brooklyn, NY, where he was ordained as a Deacon and remained a functioning Deacon until he passed. Edward worked in management at Rite Aid & CVS for many years. Nearing his retirement, he took a position in transportation until he retired and moved to Georgia with his family in 2010. He leaves to cherish his memory: his wife Dawnell, (Georgia); Kyshanne Dunn-Henry; Kayanne Dunn-Kupolati; Durran Dunn (children – USA) Rosemary Marshall, (daughter) Barbados; Grandchildren – Jace Dunn; Omari Henry; Rojana Marshall, Elise Dunn, Adlyn Dunn & Adeli Kupolati; and a host of other relatives, friends and fellow church brethren. The family will receive friends on Sunday, April 11, 2021 from 12:00 pm until 1:30 pm at West Cobb Funeral Home and Crematory in Marietta, GA. Online guest book at www.westcobbfuneralhome.com.

The family of Edward Leo Marshall created this Life Tributes page to make it easy to share your memories.

Send flowers to the Marshall family.