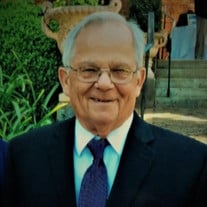 Edward William Harris Jr. "Bubba," age 83 of Powder Springs, Georgia passed away Thursday, December 30, 2021. Edward was born January 3, 1938 in St. Augustine, Florida. His family later moved to Atlanta, Georgia where he attended Joe E. Brown High School. Edward was a superb running back and broke many records including the City League Rushing Record for over 1200 yards in 1956. Edward continued his education at Gordon Military Academy where he continued to play football. He later joined the Army and served 3 years at Fort Gordon, South Carolina. After his military career, Edward distinguished himself in the printing industry and became the lead pressman at Williams Printing Company where he spent the rest of his career, retiring in 2003. Edward was married to the love of his life, Gerry Dowdy Harris, for 56 years. They raised their four children in Smyrna, Georgia, and Edward became "Bubba," and "Coach Bubba" as he was very involved in sports, mentoring and coaching the youth in the SAA Football League. "Coach Bubba" continued to coach in West Cobb after his retirement. Edward was a man of many talents which ranged from landscaping, gardening, carpentry, and building. He had a sense of humor that everyone enjoyed, and he loved his family, friends, and his animals. Edward was an active member of St. James Episcopal Church, in Marietta GA. He was preceded in death by his wife Gerry Dowdy Harris. Survivors include his 4 children: Paige (Daniel) Oberkofler from Powder Springs, Georgia, Edward William Harris, III "Bill" from Cape Canaveral, Florida, Rick (Andrea) Harris from Cumming, Georgia, and Dana (Todd) Railey from Powder Springs, Georgia, 2 siblings: a brother, Laurence C. Harris, and a sister, Judith L. Harris, 10 Grandchildren and 5 Great Grandchildren A family Celebration of Life Service will held at Edward's residence on Saturday, January 22, 2022 at 2:00 pm.

The family of Edward William Harris Jr. created this Life Tributes page to make it easy to share your memories.

Send flowers to the Harris family.