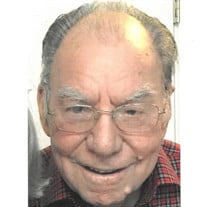 Donald Ray Butler died peacefully in his sleep on January 1, 2021. He was 91 years old. He was born on August 8, 1929 during the Great Depression. He grew up in rural southern Mississippi the youngest of two sons born to John and Estelle Butler. He is preceded in death by his parents, older brother Paul Butler and his wife Carrie Mae Reeves Butler, affectionately known as Penny. Don married Penny in November of 1952 and they were married 66 years. He adored her and often told a funny quip that as long as he had his Penny, he would never be broke. They are survived by their three children, Helen Lyn Liphart (Cary) of Punta Gorda, FL, Karen Mills (Brian) of Windermere, FL, Randall Butler (Jennifer) of Smithfield, VA, several nieces and nephews, eight grandchildren, and three great grandchildren. Don was a kind and patient man who was a wonderful role model. He never had anything negative to say about anyone. Don was spiritual and he read his Bible daily and lived his life righteously to please God. After graduating from the University of Southern Mississippi in Hattiesburg, Mississippi, he worked as an educator until entering the United States Air Force. While stationed at Kessler Field, he trained airmen in principles of radar during the Korean Conflict. He was truly one of the greatest generation. After leaving the service, he worked for General Electric, Honeywell, and Wang Laboratories in executive capacities in computer field engineering. Don loved sports and was an avid fan of all the Atlanta area sports teams, although they tried his patience over the years. He was always optimistic that this could be our year to win a championship. A memorial service will be held on Friday, January 15 at West Cobb Funeral Home at 2480 Macland Road, Marietta, GA, 30064. Visitation will be from 10:00 AM-11:00 AM. Chapel service will begin at 11:00, followed by a private burial at Georgia National Cemetery in Canton with military honors. The service will be accessible virtually @ www.westcobbfuneralhome.com.

Donald Ray Butler died peacefully in his sleep on January 1, 2021. He was 91 years old. He was born on August 8, 1929 during the Great Depression. He grew up in rural southern Mississippi the youngest of two sons born to John and Estelle Butler.... View Obituary & Service Information

The family of Donald Ray Butler created this Life Tributes page to make it easy to share your memories.

Donald Ray Butler died peacefully in his sleep on January 1,...

Send flowers to the Butler family.