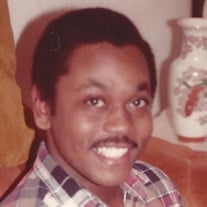 Derrizet V. Dolly, age 69, of Powder Springs, Georgia entered into rest on Monday, February 7, 2022. Funeral Services will be held at 3:00 pm on Saturday, February 19, 2022 at West Cobb Funeral Home and Crematory in Marietta with Elder William T. Winston officiating. Interment will follow at Georgia National Cemetery in Canton, Georgia on Monday, February 21st at 2:30pm. The family will receive friends from 1pm to 3pm on Saturday prior to the ceremony at the funeral home. Derrizet Velasco Dolly was born May 6,1952 at St. Phillips Hospital in Richmond, Virginia. He was the youngest of four children born to Elizabeth and George Dolly. As a child, Derrizet was wide-eyed and filled with energy. He attended school in Richmond until the moving of his family to New York City, and completed his education at Brandeis High School. As a teenager, he loved dancing, playing basketball (jumping higher than all of his fellow teammates), and running. His respectfulness, good manners, and charisma earned him the respect and admiration of others. He assisted anyone in need, without hesitation. At age 13, during the 1965 New York City blackout, Derrizet met his neighbors at bus stops in the pitch black with nothing more than a flashlight and escorted them home. In 1978, Derrizet enlisted in the U.S. Air Force where he served as a medic until he was honorably discharged in 1986. While in service, he met the love of his life: Cheryl.They married in 1980 and have since been married for 43 beautiful years. They were blessed with their loving and supportive daughter, Ivy, in 1983. Derrizet's work ethic, interpersonal skills, and willingness to help others made him a highly respected coworker and asset at Home Depot, where he worked for 22 years. Though he was small in stature, Derrizet's large personality demanded everyone's attention. His wit, colorful language, and unmatched charisma aided him in love of socializing, whether it be talking trash, telling jokes, or making people laugh. Derrizet had many hobbies. He was a talented artist. He sculpted and painted, whether it be with pencil, charcoal, or paint. He loved gardening. His love for art was captured in his landscaping and woodworking projects. He also loved to be outdoors for activities such as camping, fishing, or just enjoying the beach. He was adventurous and not afraid to try anything. Throughout his life, Derrizet has lived in Virginia, New York, Louisiana, New Hampshire, and found his final home in Georgia. More than anything, Derrizet was a man who loved his family. He was preceded in death by his father, George Dolly; mother, Elizabeth Sheppard; oldest sister, Ernestine Price; and brother, Geoffrey Dolly. He leaves behind him, his wife, Cheryl Dolly; daughter, Ivy Dolly (Jessica); sister, Renee Dolly; Nephews, Keenan Allen (Patrina), Donique Dolly (Anastazyia), Antoine Dolly, and Jermaine Price (Melanie); Niece Tamika Price; Grand-nephews, Isaiah Jackson, Keenan Allen II, and Emir Ja'Kobi Dolly; Grand-nieces, Tiana Allen, Indira Jackson, Amaya Dolly, and Amira Price; and a host of aunts, uncles, and friends.

The family of Derrizet V. Dolly created this Life Tributes page to make it easy to share your memories.

Send flowers to the Dolly family.