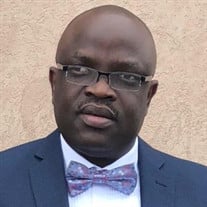 On Tuesday, August 18, 2020, Clement Obukowho Akiri, loving husband and father of three children, passed away at age 52. Funeral Services will be held at 11:00 am on Saturday, September 5, 2020 at West Cobb Funeral Home and Crematory in Marietta. Interment will follow at Mount Harmony Memorial Gardens in Mableton, Georgia. The family will receive friends on Saturday, September 5, 2020 from 10:00 am until 11:00 am at West Cobb Funeral Home and Crematory in Marietta. Clement was born on January 10, 1968 in Bendel State, Nigeria to Sagin and Grace Akiri. On April 7, 2007, he married Blessing Akiri. They raised three daughters, Eleora, Erykah, Elena. As a dedicated student, Clement did not find academic success too difficult. He was a star student throughout his academic years, graduating as his high school class valedictorian at Paynesville Community High School in Monrovia - Liberia. He later received a bachelor's degree in Administration from the Chartered Institute of Administration in Lagos, Nigeria. The Akiri family hail from Ekrakra in Kokori (Agbon Clan) Ethiope East, Delta State. His middle name, "Obukowho" means "I have someone standing behind me". There is a general belief in Urhobo tradition that a child's destiny is strongly tied to his or her name. Clement lived according to the meaning of his name. He supported his siblings financially, morally, and spiritually without fearing the "unknown". Clement contributed enormously to the success of his family members, friends, and neighbors. He left a vacuum that cannot be filled even at the Club House where he spent his leisure time in Lagos before relocating to the United States. Mr. White, Clemkiri, Akiri Raster, Clemente, were some of the nicknames given to him by family members and friends. He was a die-hard fan of the Chelsea Football Club (UK). Clement was preceded in death by his father, Sagin. He survived by his wife, Blessing Akiri, his three children, Eleora, Erykah, Elena, his brothers, Godfrey, Blessing, Fortune, Duke, his sisters, Peace, Gift, Elohor, Faith, and several cousins, nieces, and nephews.

On Tuesday, August 18, 2020, Clement Obukowho Akiri, loving husband and father of three children, passed away at age 52. Funeral Services will be held at 11:00 am on Saturday, September 5, 2020 at West Cobb Funeral Home and Crematory in Marietta.... View Obituary & Service Information

The family of Clement Obukowho Akiri created this Life Tributes page to make it easy to share your memories.