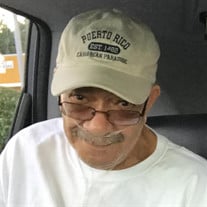 Our Beloved Father, Grandfather, Family Member and Friend, Cicero “Sonny” Rounsaville, 81, of Summerville, Georgia left us in his earthly form on April 14, 2022. Early in life, Sonny survived the untimely passing of his wife of sixteen years, Agnes Hodge Rounsaville. From that special union the two had three beautiful daughters, one of whom is already resting and awaiting his presence with open arms in heaven, Mignon Zarshenas. Sonny is survived by his two loving daughters, Garbryl Bates and Melanie King, both of Marietta, Georgia. Later in life, Cicero found companionship with Drucilla “Juju” Almond, who departed this earth far too soon as well. She was embraced by the entire family. He is also survived by his long-time dear companion, Erika Hudgins and spent many years with her and her family. She has two lovely daughters, Shaquila and Shavona Doss. Cicero also spent time enjoying her grandchildren, Kentoine “KJ” Jones Jr, who affectionately called him “Dunny” when he was little, Davion and Ariah Doss. Of the six children born of the union between Louise and Clifford Rounsaville, Cicero was the last surviving sibling. He was preceded in death by his siblings James Rounsaville, Grace Zayas, Robert (the late Regina Shropshire Rounsaville), Sharon Goodwin (the late Paul Goodwin), and Brenda Burks, all of whom resided in Summerville. Cicero is survived by a loving sister-in-law, Rochelle Culver of Glenwood, Georgia, and brother-in-law William Heyward Hodge of Seattle Washington. Cicero was the proud and loving Grandfather of eight; Granddaughter Aurielle Rounsaville and seven Grandson’s; Ryan and Dixon Zarshenas, Clayton Rounsaville, David and John Bates, and Justin and Jordan King. He had five Great Grandchildren, Layla, Abram, Corrine, Roman and Evelyn Zarshenas, with one more on the way! He has sixteen nieces and nephews: Briseis McDaniel, Alicia Roberts, Carmen Zayas, Andrea Trice, Niki Zayas, Mina Martin, Tiffany Rounsaville, Daricus Rounsaville, LaQuennth Rounsaville, Isaac, Brian and Phillip Culver, William and Cari Hodge, and Yvette and Angela Grimes. Cicero “Sonny” Rounsaville attended A.C. Carter School where he excelled in sports and was an All-American athlete. His athletic abilities were awarded with a football scholarship to Fort Valley State College where he played Quarterback. He graduated with a Bachelor of Science degree in Physical Education where he was also a member of the Kappa Alpha Psi Fraternity. Although he never taught, Cicero was proud of his thirty-five year career at General Electrics in Rome, Georgia, where he retired after many years of service. Cicero had an adventurous, renegade spirit, a love for Harley Davidson motorcycles, Western films, and the outdoors. He was also an avid swimmer and worked as a lifeguard in his youth. He enjoyed horseback riding, fishing, archery, and shooting guns. He was a mischievous prankster and storyteller, with an unmatched sense of humor, a contagious infamous laugh, and a vibrant attitude. With an indulgent free-spirited heart, he enjoyed Coca Cola, Winston’s, and Mimi’s banana pudding made from scratch. And if you ever saw him out and about, his head was always covered with a baseball cap. He didn’t brag or boast about all his accomplishments in life. He was just a simple man who was very generous and had a giving heart. He was also very wise and intelligent. Those who had the pleasure of knowing Cicero, loved and respected him deeply, for he was a man’s man. Sonny didn’t have to say much, for his company and energy to be thoroughly enjoyed by everyone in the room. We ask that you remember Cicero “Sonny” Rounsaville with a loving heart, joy and laughter, as he would have preferred, and know that he is at peace. His adoring daughters, Garbryl Bates and Melanie King

Our Beloved Father, Grandfather, Family Member and Friend, Cicero &#8220;Sonny&#8221; Rounsaville, 81, of Summerville, Georgia left us in his earthly form on April 14, 2022. Early in life, Sonny survived the untimely passing of his wife of sixteen... View Obituary & Service Information

The family of Cicero Augustus "Sonny" Rounsaville created this Life Tributes page to make it easy to share your memories.

Send flowers to the Rounsaville family.