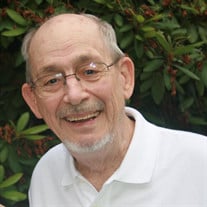 Charles Whitney "Chuck" Olive, Jr., 85, passed away on Monday, April 25, 2022 at Wellstar Paulding Hospital after a brief illness. Charles was born in Newton, Massachusetts on June 26, 1936. He received a bachelor's degree from the University of Massachusetts at Amherst and went on to receive a Ph.D. in Microbiology and Biochemistry from Syracuse University. He published several articles, including one in the Journal of Biological Chemistry in 1971 which detailed a breakthrough discovery that he made while at Syracuse University. Throughout his life, Charles worked for many different companies including Tufts University in Boston and Michael Reese Hospital in Chicago as a Research Scientist. In his later years, he started Olive & Associates, a biomedical technical writing company. After a life of moving to various cities on the east coast, Charles returned to his favorite place, Cape Cod, with his wife, Anne, where they lived for over 30 years. His last 3 years were spent in Powder Springs, Georgia, with his daughter, Susan Tucker, and her husband, Dennis, who did their best to make him happy and keep cookies and bagels in his cupboard. Charles had many interests including birding, photography, sailing, and gardening. He loved both jazz and classical music. He volunteered at Waquoit Bay Estuarine Reserve, searching for Piping Plover nests that needed to be relocated for safety. Charles is survived by his wife, Anne Chesley Olive; his brother, Robert Olive of California; a daughter, Susan (Olive) Tucker, her husband Dennis Tucker of Georgia; and a son, Christopher Olive, and his wife, Inna Gerzon of Massachusetts. Also surviving are his grandchildren, Sydney Tucker Ross and her husband, Rex Ross, Madison Tucker, Alexandra Olive, and Isabel Olive. He would have been a great-grandpa in September. Charles will be cremated and his ashes will be spread on Cape Cod by his family.

Charles Whitney "Chuck" Olive, Jr., 85, passed away on Monday, April 25, 2022 at Wellstar Paulding Hospital after a brief illness. Charles was born in Newton, Massachusetts on June 26, 1936. He received a bachelor's degree from the University... View Obituary & Service Information

The family of Dr. Charles Olive Jr. created this Life Tributes page to make it easy to share your memories.

Send flowers to the Olive family.