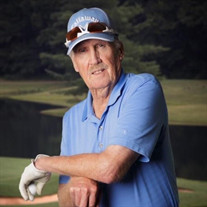 Charles E. Adams, age 85 of Marietta, Georgia made his journey Home Tuesday, December 28th, 2021. Funeral Services will be held at 2:00 PM on Wednesday, January 5, 2022 at West Cobb Funeral Home and Crematory in Marietta. Interment will follow at Kennesaw Memorial Park in Marietta. Survivors include: 3 Children, Deborah Adams (William) Lowery, Powder Springs, GA, Troy William (Nancy) Adams, Canton, GA, and Jason E. (Nicole) Adams, Acworth, GA; Sister, Bobbie Lacock, Milner, GA; 4 Grandchildren, Jared Lowery, Stephen Adams, Savanna Adams and Chandler Adams. Charles was born in Seneca, SC and moved to Atlanta, GA as a child. He married his childhood sweetheart Doris Lou Neal Lanford (preceded in death) and in 1962 made a home for them in Marietta. There, they raised their 3 children. Charles was a sign painter by trade; painting billboards for Pepsi Cola, advertising with Dixie Bottle & Beverage and finished his career with Atlanta Beverage where he retired after 20 years. He was also a general manager with Aunt Fanny’s Cabin. In his early years, he spent numerous nights doing jobs in the basement of his home while his children were at many times by his side. Charles loved to tell stories, practical jokes, and had a laugh that would light up a room; not to mention a fantastic dancer. Many that knew Charles would confess that golf was his absolute passion. Before his golfing days were over at the age of 83, he had amassed an amazing six hole-in-ones. He was a member of Chapel Hill Country Club (Douglasville, GA) and Mirror Lakes Golf Club (Villa Rica, GA). The family will receive friends on Tuesday, January 4, 2022 from 5:00-8:00 pm at West Cobb Funeral Home and Crematory in Marietta. Online guest book at www.westcobbfuneralhome.com. Rev. Bill Rorie will be officiating. The family would like to offer special thanks to Elizabeth, Caroline, Marion, Ruth and Lexi.

The family of Charles E. Adams created this Life Tributes page to make it easy to share your memories.

Charles E. Adams, age 85 of Marietta, Georgia made his journey...

Send flowers to the Adams family.