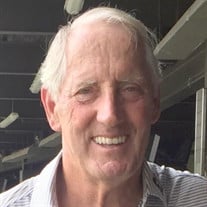 Bruce Alan Abel, 79, of Acworth, Ga. (formerly of Pittsburgh, Pa.), passed away on Sunday, August 29, 2021, while at Emory St. Joseph’s Hospital in Atlanta. Bruce was born on June 30, 1942, in Pittsburgh, and was a son of the late Edward G. Abel and Gladys K. Walliser Abel. He was a 1960 graduate of North Hills High School in Pittsburgh, where he played varsity football, basketball, and baseball. He was inducted into the North Hills High School Hall of Fame in 1997. He was a graduate of the United States Naval Academy, where he also played football, including the national championship game at the 1964 Cotton Bowl. Bruce was a retired Navy Commander, having served as an active duty P-3 Orion pilot, then transitioning in 1970 to a long career in the Reserve. He worked for the Westinghouse Nuclear Fuel Division, followed by a career with Thrift Drug, both in Pittsburgh. After retiring in 2006, he moved to the Atlanta area. Bruce was predeceased by his wife of 43 years, Helene Ruth Kight Abel, brother Edward R. Abel, and infant brother Lonnie Abel. He is survived by his loving wife Carole Bale, with whom he shared twelve wonderful years. He is also survived by son, Scott G. Abel (Marshall Township, Pa.); daughter, Tiffany S. Smedley (Powder Springs, Ga.); brother, Glenn K. Abel and wife Susan (Chester Springs, Pa.), brother, Lee G. Abel and wife Connie (Chalfont, Pa.); sister-in-law Anna C. Abel (Holly Springs, N.C.); seven grandchildren, one great-granddaughter, and many lifelong friends and companions. He will be remembered for his passion for Pittsburgh sports teams, Navy football, and golf, but mostly for his faithful love of family, friends, and country! A Memorial Service will be held at 11:00 am on Friday, September 3, 2021 at West Cobb Funeral Home and Crematory in Marietta with Pastor Tom Gray officiating. The family will receive friends on Friday, September 3, 2021 from 9:30 am until 11:00 am at West Cobb Funeral Home and Crematory in Marietta. An after-service reception is also being hosted at Brookstone Golf and Country Club in Acworth, GA. All visitors are welcome. Online guest book at www.westcobbfuneralhome.com. In lieu of flowers, donations may be made in Bruce Abel's memory to www.woundedwarriorproject.org. The family is also planning a Celebration of Life event, to be held in Pittsburgh at a later date.

The family of Bruce Abel created this Life Tributes page to make it easy to share your memories.

Send flowers to the Abel family.