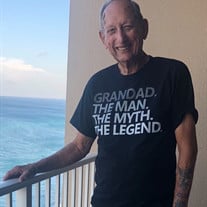 On Tuesday, August 18, 2020, Frank Suddeth, loving father and grandfather, passed away peacefully in his home at the age of 78. Funeral service will be held at 10:00 a.m. on Saturday, August 22, 2020 at West Cobb Funeral Home and Crematory Chapel in Marietta, GA with Rev. Carl Braswell officiating. Interment will follow at Georgia Memorial Park in Marietta, Georgia. Frank was preceded in death by his wife, Betty, his father, Ben, his mother, Wilda and his brother, Jerry. Benjamin Franklin Suddeth, Jr. (Frank) was born on August 22, 1941 in Cullman, AL to Ben and Wilda Suddeth. He served in the US Navy as an Electrician First Class. Upon his discharge he returned home to Smyrna, GA and became a member of the International Union of Operating Engineers Local 926. He worked the entirety of his career as a Union Member and is a current member (retired). On May 14, 1965, he married Betty Jean Suttles. They raised one daughter, Tina and had two grandchildren, Kaitlyn and Ryan. Frank could fix anything and he loved teaching others to fix things as well. His best advice when doing any sort of project was to "read the directions". He was also an avid music lover and enjoyed using his Pandora app and bluetooth speaker to play his favorite music while sitting on his beloved porch. He was known for his quick wit, his infectious smile, and his kind and compassionate spirit. Survivors include: daughter: Tina (Tommy) Daugherty of Woodstock, GA; brother: Johnny; sister: Selena Young; two grandchildren: Kaitlyn and Ryan Pierce of Woodstock, GA and several cousins, nieces and nephews. The family will receive friends on Friday, August 21, 2020, from 4:00 pm until 6:00 pm at West Cobb Funeral Home and Crematory in Marietta, GA. Online guest book at www.westcobbfuneralhome.com.

On Tuesday, August 18, 2020, Frank Suddeth, loving father and grandfather, passed away peacefully in his home at the age of 78. Funeral service will be held at 10:00 a.m. on Saturday, August 22, 2020 at West Cobb Funeral Home and Crematory Chapel... View Obituary & Service Information

The family of Benjamin Franklin Suddeth Jr. created this Life Tributes page to make it easy to share your memories.

Send flowers to the Suddeth family.