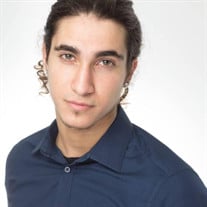 Alexander Merhi, age 25, of Austell, Georgia passed away November 27, 2020. Graveside Service will be held at 1:00 pm on Monday, December 7, 2020 at Kennesaw Memorial Park, 1306 Whitlock Ave in Marietta, GA. Survivors include: father: David Merhi of Austell, GA; mother: Balsam Merhi of Austell, GA; brother: Rheann Merhi of Austell, GA. Alex Merhi was the most beautiful, sweetest and loving humble soul who passed away on Thanksgiving night in his home state of Atlanta Georgia. Alex graduated in 2020 from Kennesaw State University with a Computer Science degree. He designed and built all types of games from mobile to virtual reality with a career aspiration to be a professional Software Developer. Alex had many interests but his passions included traveling, various musical genres, Far Eastern culture, riding motorcycles, Japanese anime, his favorite show Tokyo Ghoul, his pet boa Rainbow and above all else, playing and developing video games. Alex showcased his talents to his close friends and professors with one of his last projects, a virtual reality installation profiled at an Atlanta museum. His family appreciates the outpouring of support from all the friends, families, fans of his work, professionals, as well as the communities who wish for his memory and his digital arts to live on. May he Rest In Peace. The family will receive friends on Sunday, December 6, 2020 from 3:00 pm until 6:00 pm at West Cobb Funeral Home and Crematory in Marietta, GA.

The family of Alexander Merhi created this Life Tributes page to make it easy to share your memories.

Send flowers to the Merhi family.